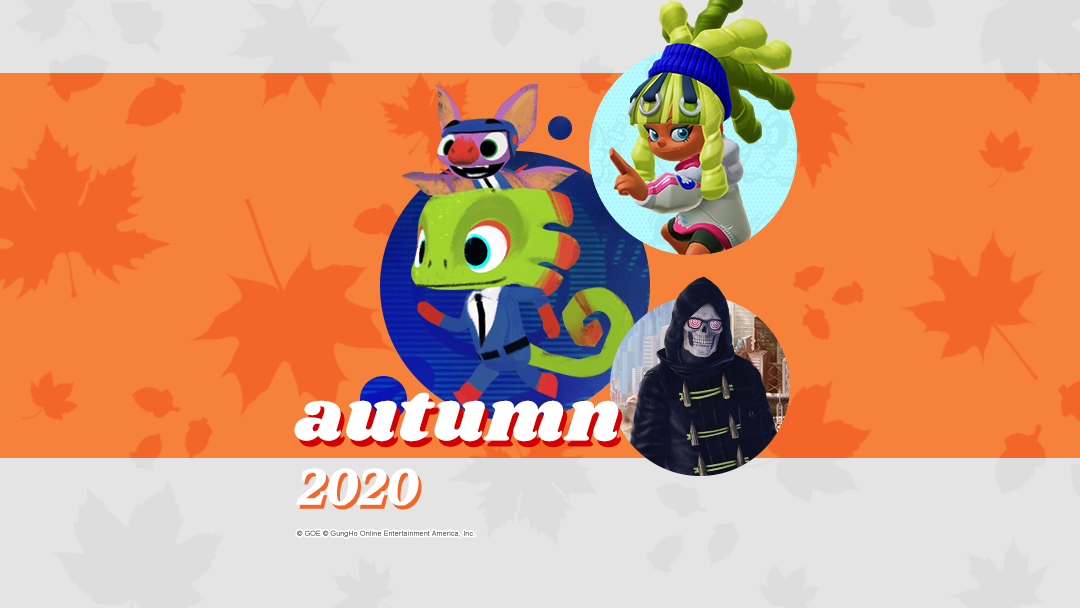 We hope everyone had a safe and relaxing Thanksgiving weekend! The past three months here at GungHo America went by pretty quickly with a handful of collabs, updates, prepping for a World Championship, and more! Let’s go over some of our most exciting events we had this fall.

This past few months for Volta-X has been pretty busy too. We had our first major update in October which added an Edit Mode to the Headquarters, new battle Emotes, a Volta taunt, new weapons, and adorable Kaiju and Volta themed Crew Costumes

for Halloween. Check this article out for more details on the first update.

Our second update introduced our first collab with Playtonic Games’ Yooka-Laylee. Yooka and Laylee have joined the World Volta Association (WVA) as a crew member to start their journey to become the best Volta pilot. The iconic duo has its own

unique power and side story that all Yooka-Laylee fans can enjoy. Along with the collab, the update also added another set of new weapons and a new Emblem System. More information on the collab and update can be found here.

Interested in learning how Yooka and Laylee came to life in the world of Volta-X? You can read about the designing and developing process of this special collaboration here!

Fall for Ninjala started off with our first in-game collaboration with Sonic The Hedgehog. The speedy blue hedgehog and his friends came to Ninjala through some awesome avatar outfits, IPPON decorations, stickers, and more!

We also introduced a brand-new gameplay mode called Feature Battle. Featured Battles are limited-time events that feature unique goals and objectives, and our first event that it debuted with was “Beast Attack!,” which was perfect for Halloween.

Then came episode four of the cartoon anime, “The Shinobi Village.” In this episode we learned more about Kappei and his family’s connection to Gumchi, the mysterious yellow alien creature that’s always hanging around you in the base.

Season 3 finally arrived in late October, introducing a handful of new content including an in-game collab with Kyary Pamyu Pamyu’s hit song “Ninja Re Bang Bang Steve Aoki Remix.” We collaborated with the queen of kawaii back at launch, but this was our first time having an in-game collab with her and the song. In addition to the collab, a new stage, new weapons, and Story Pack: Chapter Two was also added. Have you all been able to check everything out? Season 3 will be available until January 2021 so be sure to play during your holiday break!

TEPPEN began this autumn by introducing the 13th Hero and expansion, Amaterasu and “The Tale of Amatsu no Kuni.” In this expansion, two new Capcom IPs joined the TEPPEN family, Okami and Sengoku Basara.

Fall is an exciting time for TEPPEN players since it also means that we’re getting ready for the TEPPEN World Championship 2020. This year’s World Championship will be held completely online due to the worldwide pandemic, but that isn’t going to stop us or the players! This year, players can participate in the tournament through two ways: the Online Region Cup or Tour Points. The results for both have already been announced, and the top 20 players who have obtained the most Tour Points throughout the year and the top 3 players from each region from the Online Region Cup have earned their tickets to participate in the Finals. Good luck to all 32 contestants and we can’t wait until the Final round, which will be held on December 19 and 26. Stay tuned for more updates on the event!

Other than the World Championship related events, we had another exciting announcement for players in Latin America. TEPPEN has expanded and is now available in 12 additional countries in Latin America! View the full list of countries here.

In recent updates, we introduced the long-awaited Spectator Mode, a new quest board, and a revamp to the Chronicles game mode. We will also be having a special holiday campaign to celebrate the end of the year with exclusive player icons, Secret cards, and a handful of free Pack Tickets, great for new users to catch up.

Persona, Monster Hunter, The King of Fighters, and the GungHo collab all returned to Puzzle & Dragons with new characters, Ultimate Evolutions, and special dungeons.

November 8 was Puzzle & Dragons’ 8th anniversary in North America, so of course we need to celebrate this exciting occasion with special bonuses, events, and dungeons! The 8th Anniversary Event will last until December 31, so players still have plenty of time to get all of their rewards and bonuses, including 100 FREE Magic Stones for new players. We also received a special video message from the Producer Yamamoto, so make sure to check that out too!

And last but not least, LET IT DIE. In the last Summer recap, Uncle Death was still missing from the HATED Arcade and would show up talking nonsense about collabs. He’s finally back...but in an unexpected way.

In the latest LET IT DIE stream, Uncle D announced that he is back home and shared some exciting news for the game. He revealed some collabs that are in development where he is planned to make some special appearances, as well as a “Uncle Death Comes Home” event.

Here’s the biggest announcement. Uncle Death started his own YouTube channel and he already has some gameplay videos up! Sounds like Naomi’s going to have to keep running the LET IT DIE social channels for a bit longer, but it seems like she doesn’t mind. She actually sounded pretty supportive of Uncle D’s new career, so why don’t we also show some support and follow his Twitter and subscribe to his channel.

We only have one month left of this hectic year, but we still have a lot more events coming up so don’t go into hibernation yet! Spend the holidays playing GungHo games and follow our social channels below so you won’t miss any of our news and updates.