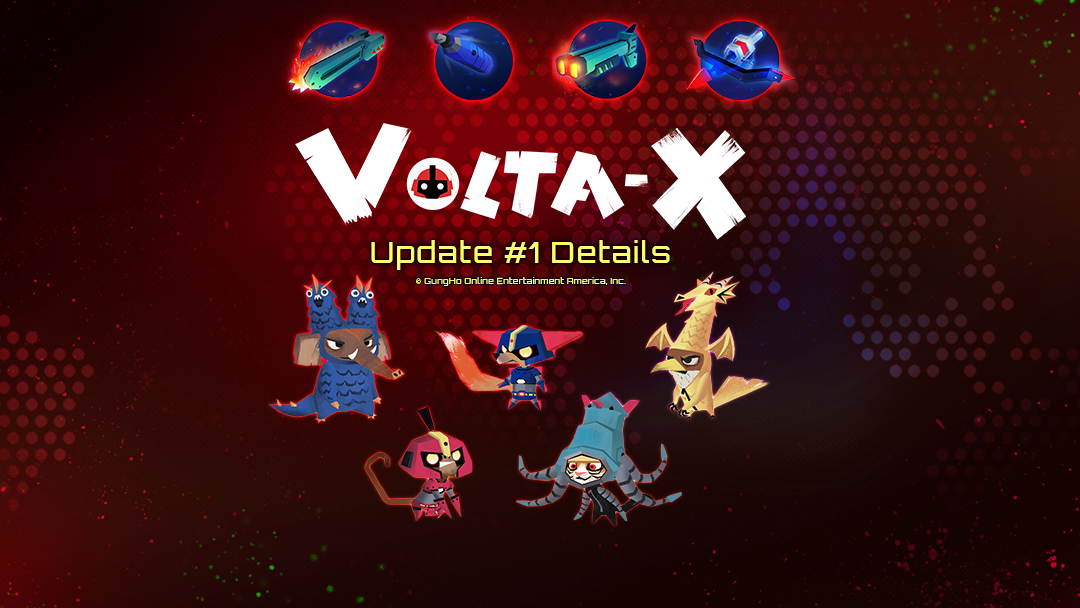 The world of Volta-X just got a whole lot more exciting with a host of additions and improvements that have arrived with our latest update. We’ve had some of the World Volta Association’s top engineers and scientists toiling away in our most secret and secure labs to come up with a range of incredible new ways to shake up the arena this season.

First, the new weapons. While we love all the current accoutrements available, we thought it would be even more fun if we added in a few new armaments to push your strategies even further. This week, we’ve introduced four new weapons your crew will be able to research and add into your loadouts for all Volta frames.

One of our favorite new inclusions is the Shotgun. This ranged weapon will be able to fire multiple projectiles at once, dealing spread damage to all parts from a distance. However, if you manage to fire it at close range, you can deal massive damage to one specific part.

We’re also revved up for the addition of the Chainsaw. With its melee combo, you’ll deal impressive damage on the first swing, and follow that with three subsequently weaker attacks. Who doesn’t love a good slice and dice?

Those of you who enjoy getting up close and personal in a Volta bout might be interested in the new Light Punch. This punch attack doesn’t deal out high damage, but does come with a faster cooldown, meaning you’ll be able to pack more punches. However, you won’t be able to target flying objects.

And we haven’t forgotten about you ranged weapon fans. We think you’ll appreciate the new Ballista, an ancient-looking ranged weapon with an extremely short cooldown. Like the Light Punch, there’s not a lot of damage being dealt by just one Ballista, but firing multiple Ballistas in rapid succession? That’s a different story. Take a look at both in action in the video below.

Additionally, you’ll find that there are Taunts and Emotes implemented for the first time, allowing ambitious players to play some head games with the opposition. Taunts are performed by the Voltas, and do leave you open for attack, so only the gutsiest players should even think about dancing in the middle of a league battle.

Emotes can express either positive or negative reactions from the crew. They won’t pause battle, but you may elicit a response from your opponent when your crew member’s face appears in the upper portion of the screen communicating your excitement… or despair!

We’re also going to be introducing five new alternate costumes for characters Ian, Lisa, Sheldon, Benjamin, and Grant based on Volta and Kaiju designs. These will be obtainable through our regular special events, so you’ll have to keep an eye out for opportunities to earn these in the arena.

On the more technical side of this update, Volta-X will see improvements in the following areas too:

Many of you will be happy to hear we have heard the requests, and will be including the ability to have multiple save slots per profile. Now you will be able to start over with different builds and team compositions by simply changing save files through the Settings menu in-game!

Lastly, this weekend Volta-X is on sale at 50% off its regular price on Nintendo Switch, Steam, and the Humble Store, meaning you’ll be able to join in on all the fun you’ve been missing out on for just $9.99. Whether you’re a new player, or have friends you think would make great pilots in the WVA, there’s truly no better time to play Volta-X. Make sure you act fast, as Volta-X will only be on sale from 10/29 through 11/2!

At the World Volta Association, we’re constantly evaluating ways to evolve the in-arena action and find ways to improve the quality of life for our daring pilots and crews. We will continue to have more news on future updates to Volta-X as the year continues, and hope that these additions and changes will please all members of the World Volta Association. As always, thank you for your continued participation in the greatest robot battle league in the world.