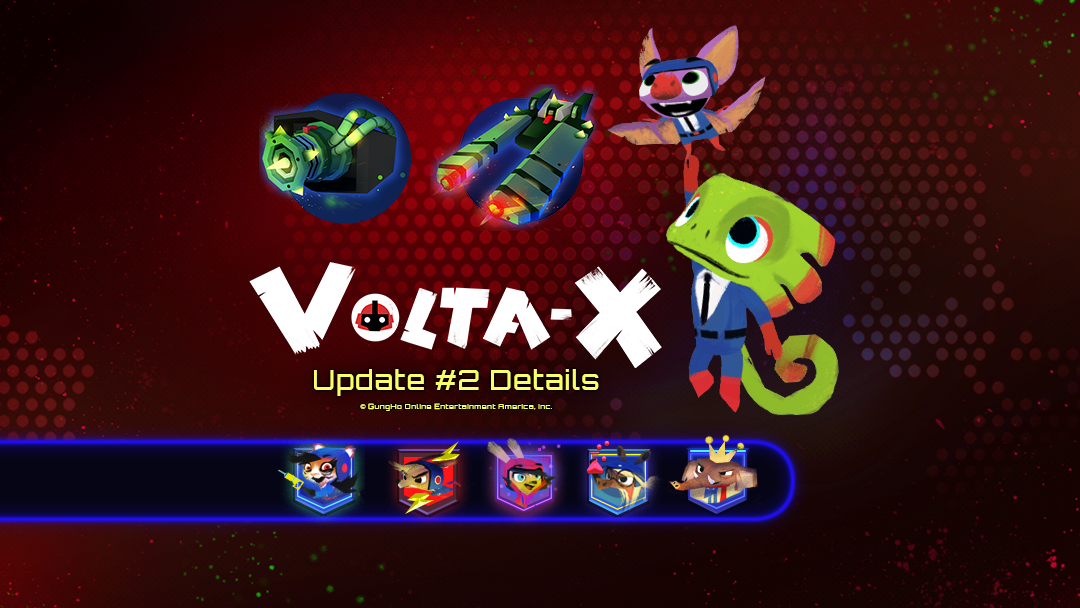 Volta-X Welcomes Yooka-Laylee to the WVA

Book your trip to exciting Sydney, Australia now, and embark on an adventure to recruit two of the most well-read pilots to ever sign up for the World Volta Association, Yooka and Laylee. Yes, that’s right; our second major update to Volta-X introduces Playtonic Games’ adventuring heroes from the Yooka-Laylee franchise. Available today for free, Volta-X Update #2 opens up a whole new world of possibilities with our first collaboration, and promises to make your journeys through the ranks of the WVA more interesting with the addition of powerful weapons, rewarding emblems, and additional adjustments to the core game sure to make every crew that much more formidable.

In an all-new side story, Yooka and Laylee challenge your current crew to defeat them in battle before joining your growing squad of practiced pilots. However, the Yooka-Laylee shenanigans don’t end there. Everyone’s favorite rival, Conall, has a new challenge for you, too. Can you withstand the gauntlet of facing multiple opposing Voltas in one lengthy battle? We guess you’ll just have to explore more of Yooka and Laylee’s story missions to find out!

Fortunately, you won’t be lacking in new strategies for these tough new matches, as this update includes two new weapons as well: the Capital Ship and the Dai Beam Cannon. The Capital Ship summons a massive new drone into battle, taking up all four drone slots. This ranged weapon will continue to attack different rooms on the opposing Volta all on its own, too. The Dai Beam Cannon was developed specifically for our latest crew members and their new special ability, Slurp State.

A body weapon without any cooldown, the Dai Beam Cannon lets you fire at will as much as you want, but not without consequence. If it overheats, the weapon will explode, causing a fire in that room on your Volta. Additionally, if an enemy is attacking the Dai Beam Cannon, it can cause the weapon to overheat if exposed to fire for electricity, too. But don’t worry too much, as Yooka and Laylee’s ability, Slurp State, can put a quick end to any fires… and turn them into an advantage for you!

Slurp State, which you can find on Yooka and Laylee’s ability tree, is a unique new power that allows Yooka to absorb any elemental effect in a room, and then turn around to power up whatever weapon he wants on its next attack. So not only will Yooka and Laylee help keep your Volta from suffering too much damage if they act quickly, they’ll also be able to return the favor to the opponent. The strategies here could be endless, and we can’t wait to see what you come up with in your WVA matches.

Elsewhere, you’ll find that we’ve added new emblems for you to earn for completing tasks like reaching research level 10, finishing first in a season, or even assembling 30 different parts. See how many you can earn to prove your crew is unmatched in their desire to be the best in the WVA, then show them off to all your opponents to make them incredibly jealous of your achievements.

Additionally, we’ve included some technical improvements and balance adjustments with this update.

Stay tuned for more Volta-X updates by following us on Twitter!