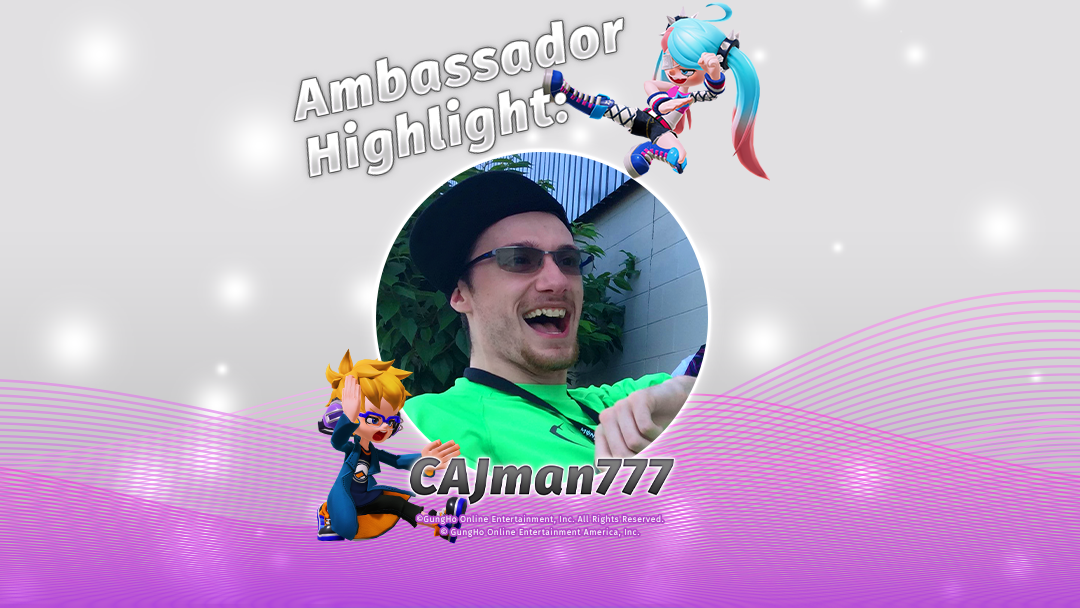 CAJman777, or Jman, is a content creator and streamer who focuses on Nintendo and indie games. With an animation background, he has been using his skills to grow his channels and is known within the Ninjala community for his weapon guide videos. Read about how Jman fell in love with Ninjala and what goes on into his content creation!

How did you start your career as a streamer and what kind of streams do you do?
So believe it or not, I actually started making content way back in 2013. Early in high school I literally had nothing to do with all my excess energy (You know besides being part of the Chess and Golf Teams), so with a small group of friends I started a YouTube Channel. Looking back on my early stuff, I mean... I think we can all agree our earliest works of content creation and streaming could be a bit cringe at times, but everyone had to start somewhere. That never stopped me though, as I grew up creating content during Minecraft's initial "boom." It was a nice jumping off point and from there I moved from game to game pretty quickly until I came across a little game known as Splatoon. This quickly became the bread and butter of my content creation and my leap into the Nintendo content creation field! From this point on after finding Splatoon, I felt I had found my place as a content creator. Of course, as the game got older I was introduced to more of the Splatoon community and the content creators involved, but it also allowed me to focus more on a singular goal of content creation. Now while I'm still a relatively small channel, I continue to improve and grow as time goes on! I always like experimenting with different styles and edits to make each video feel unique, while still maintaining my sense of style in them. That also carries over to my Twitch streams, but for my Twitch channel and viewers, I like to play a variety of games rather than focusing on games just around Nintendo. As a content creator and streamer, I do a massive variety of content. From simple funny videos, to montages, to guides, to community days, I do it all on YouTube and Twitch.

What is your favorite GungHo game and why?
Hands down, it's Ninjala. Ninjala has played such a big role in my content as of late and it's really helped me expand and grow as a creator! I've known about Ninjala ever since it was first revealed back in E3 2018. I thought it was a cool concept at first, but then, everything got quiet for a while regarding Ninjala... Until 2020 that is! Ninjala came back in full force and with the characters feeling like the actual kids if they weren't squids. I was hooked. The vibrancy of the game, the style, the characters It reminded me of when my content creation hit it's first big stride which put such a big smile on my face! Ninjala continues to improve through its seasons and honestly I can't wait to see where it goes soon!

Do you have any tips for someone who just started playing Ninjala?
The BIGGEST things I can tell someone when they start playing Ninjala is: Be patient when it comes to updates, practice and study your opponents. Ninjala, is a very high-skill game when it comes down to it! Yes, it will take a lot of time to understand and master the controls. Yes, you will get beaten down your first few weeks of playing Ninjala, but that's because the skill cap of the game and players skills today are rather high. There are lots of hidden techniques and combo routes to study. Lots of weapons to learn and counter, but all the while the game has this charm that just makes you want to keep playing. So don't give up and just practice! As far as the updates are concerned. They will come over time. The developers of Ninjala have been very keen on listening to feedback from players and every season the game continues to get better! I love game developers that listen to their community and continue to improve their games, but that's what good game developers do! GungHo has a fantastic reputation when it comes to support of it's games, so even if an update might not come right away... It'll happen sooner than most people think!

How did you become a GungHo America Ambassador and what do you like the most about it?
How did I become an Ambassador? Well, when Ninjala came out I was hooked and I mean heavily hooked on the game. I'd play it almost non-stop grinding tiers. I was always wanting to make a new video about the game and on top of that, I ended up being one of seven Season 1 Ninja Gods worldwide, and those seven who were Ninja Gods have the In-Game sticker to prove that. Along with that, I just constantly made content for the game while also being a prevalent part of the community. I was well known in the community for my detailed Ninjala weapon guide series, in which I broke down every weapon class in the game (I'm up to nine Guides now with a 10th currently in the scripting stage). It wasn't until the tail end of Ninjala Season 2 that I got contacted by GungHo America to become an Ambassador for Ninjala! Honestly, I'm very happy they decided to invite me into it as well! It's got its benefits, the in-game "drip" and the cool higher-ups you can talk to. For me, the thing I enjoy the most about being an Ambassador is being a positive representative for the entire community. Whether it's taking in other community members feedback and relaying it back so it gets fixed later down the line just feels good. It's also great being an influencer and saying to people: "Hey this game has got some good stuff. You have to try it, I think you'll like it."

Being a part of a community that's just wholesome at its core. It just feels right. Even just being able to spread awareness for a game that I love so much is just great! Being a community voice and a content creator for this game allows me to do that in ways I never thought imaginable!

How do you feel about commentating for the upcoming Massive May Melee (MMM) tournament this weekend?
As far as commentating for MMM is concerned, I’m amped up. There’s bound to be some extremely intense matchups and matches that surely will be decided by just a few points. But I can’t wait to bring all my previous commentary experience to the table for the MMM. Some people may know this already, but for those that do not, I’ve commentated on Splatoon eSports events for years now at a professional level. I can’t wait to bring that same energy and game knowledge I had for Splatoon to Ninjala and the MMM!

Do you have any goals as a streamer and GungHo America Ambassador?
As content creator and streamer, I'd love to be able to actually create content and stream full-time. As of right now with my channels for both my content platforms being on the smaller end of the scale, I can only push forward so much. I do all the creation work for my content, from the recording, to the editing, to the actual videos and stream layouts themselves. I do it all and I create it all. All the while I'm balancing having a part-time job outside of my content creation as well as improving on my animation portfolio. So I keep myself busy, yet I still manage to keep a weekly upload schedule! However, I'd love to be able to share my works with a larger audience on a more regular basis than just once a week!

But as an Ambassador, I'd love to be able to reach a point in this position where the content that I make just explodes with people wanting to play Ninjala! I'm more than willing to help people out in this regard, and I'm sure our other Ninjala Ambassadors are willing too because at the end of the day it really is a team effort!

What are your motivations for streaming?
For me it's all about community and knowing I can make a difference in people's lives. If it wasn't for a community I would not be balancing my creation as much as I am now. Community and difference making everything. It is the heart and soul of any channel and it 100% should be. If it wasn't for the people supporting my content, I wouldn't be where I am now. Knowing that's there's people out there, counting on you and waiting on you to make their day or even just say hello, that means the world to me! My biggest motivation is and ALWAYS will be my community and the bonds that I have with each member of said community because I wouldn't be where I am without them and they make all the difference.

Any advice for someone who wants to become a content creator?
If you want to just get started making content, I would just say... You have to understand that there's a long road ahead, but you can't let it drag you down. Even me, I'm a smaller creator and I sometimes feel down on myself, but you just can't do it. Keep a positive mental state, do what you do best and just be yourself. Don't try to imitate others, don't feel bad if a video you make does poorly, because when you're starting out this will happen. It takes time, effort and an understanding of those algorithms to really start putting you on the map! Being a content creator is NOT easy. Many people seem to think it is. But it's only easy if you're putting minimal effort behind it and that won't help you! You have to take the wheel and drive!

Anything else you'd like to mention to the readers?
I don't really have too much to say other than: "Until then this is C-A-Jman Triple 7 signing off!... Stay safe everybody!"