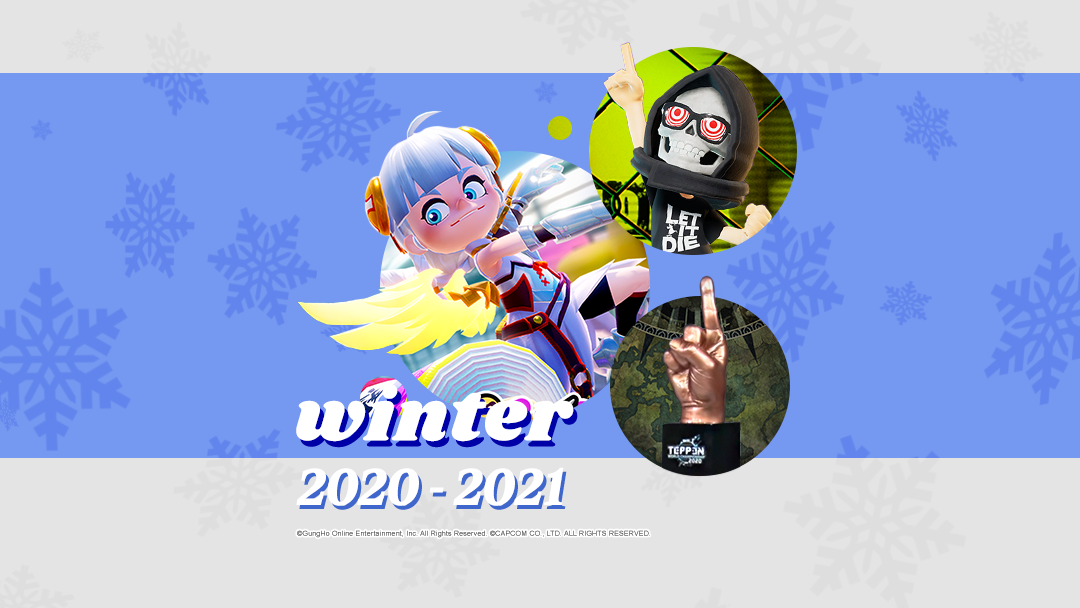 It’s starting to smell like spring, which means it’s time for the winter 2020-2021 recap! Last year was rough for everyone, but we hope playing our games gave you some light in a year full of crazy events. Looks like this quarantine life will still continue, but don’t worry! We have lots of exciting things planned to keep you all entertained and safe at home! With that said, let’s get into the recap and go over all the fun events we had this winter.

Winter for TEPPEN means World Championship season! Our players had been preparing for it since fall and December is the time for the best of the best to fight for the top.

Everything was held online due to the global pandemic, and the finals were right after Christmas on December 26. After 31 matches, kuran from Japan, took the crown! If you missed the event, we have a 2020 World Championship playlist so you can find all of the Championship related videos in one place! If you’re interested in the finalists, we have player stats available too, so make use of it and prep yourself for future tournaments!

At the end of the event, our fourth Black Hero, Oichi, and “The Battle of Amatsu no Kuni” was revealed. The Demon Queen Oichi introduced three brand-new Hero Arts, as she grieves the loss of her husband and falls into the shadows of the void. For more information, check out the official website.

We had two more tournaments in February starting with our first Red Robin Tournament. Unlike our usual tournaments which are more for advanced players, this tournament was open to all levels, so anyone had the chance to play and win a prize. The second was the New Year Tournament 2021, where we saw many familiar faces from the World Championship 2020. The crown was yet again taken by our current TEPPEN Champion, kuran. Missed all the intense matches? Watch the livestream VOD here.

In mid-February our latest Hero,Ada Wong from Resident Hero was revealed! Now that Ada has joined TEPPEN, all of the Heroes aiming for the Land of Illusion have gathered and TEPPEN’s true story will finally begin. Ada and “A Dark Agenda” is now available to play in-game. For more information, visit the expansion pagehere.

This was our first winter with Ninjala and we had lots of fun events going on. We started off with a Puzzle & Dragons collab, featuring awesome looking skins from popular monsters like Red Dragon Caller, Sonia and Valkyrie.

In January we celebrated the New Year with the release of Season 4 and the fifth episode of the cartoon anime featuring Emma, our dancing ninja! Season 4 introduced a new Featured Battle,,Loot Battle Matsuri, and two collabs! Kyary Pamyu Pamyu, the queen of kawaii, returned for a second collab, but this time for her latest song, “Gum Gum Girl.” The second collab was with LET IT DIE, a game fans may have been surprised to see in Ninjala. Check out all of the kick-ass LET IT DIE themed items you can get before the collab ends on March 10.

Outside of the game we had the Holiday Ornament and Valentine’s Day Contests where we asked the community to submit Ninjala themed ornaments and Valentines. We received so many amazing masterpieces and definitely felt the love from the community. We’ll be having more contests in the future so make sure you’re following us on all of our social pages!

Winter is Uncle Death’s favorite time of the year because December 4th is LET IT DIE’s anniversary! 2020 was the game’s 4-year anniversary and to celebrate, Uncle Death had a kick-ass anniversary event in the Tower of Barbs. He even spent Christmas Eve with a livestream spending time with his favorite dev, Director Hideyuki Shin.

Remember how we talked about Uncle Death debuting as a YouTuber last fall? Well, it seems like he’s keeping it going, so do him a favor and check his latest gameplay videos out! We heard he’s filming his next video so make sure to subscribe so you know when the video goes up!

Like always, Puzzle & Dragons had been busy with collabs and special holiday events.

During the holidays we had our annual Christmas and PAD New Years events! Popular Puzzle & Dragons monsters celebrated by dressing up in special holiday outfits.

Did you see how adorable the new Holy Night Gift, TAMADRA is with that Santa hat?! Check it out here.

February is a special month for Puzzle & Dragons since February 20th is the game’s anniversary in Japan! 2021 is Puzzle & Dragons’ 9th anniversary and North America is joining the celebration with a whopping 100 FREE Magic Stone login bonus, a special Experience of a Lifetime dungeon, and more! This special event will be available until the end of March, so make sure to login before it ends!

Have you been training to become the best pilot of WVA? Volta-X has been having weekly events to test your piloting skills and win some awesome prizes to help level up your Voltas like the Beware the Wyvern or V Buster events.

We also had a Holiday Costume Party Event with wacky costumes to celebrate the New Year, as well as individual Costume Events for Irma, Briana, Benny, and Grant! What kind of outfit do you want to see next?

That’s it for this year’s winter recap! Let us know what your favorite was and what you’d want to see more from us in 2021! Thanks for always playing and supporting our games and stay tuned for more announcements and events!