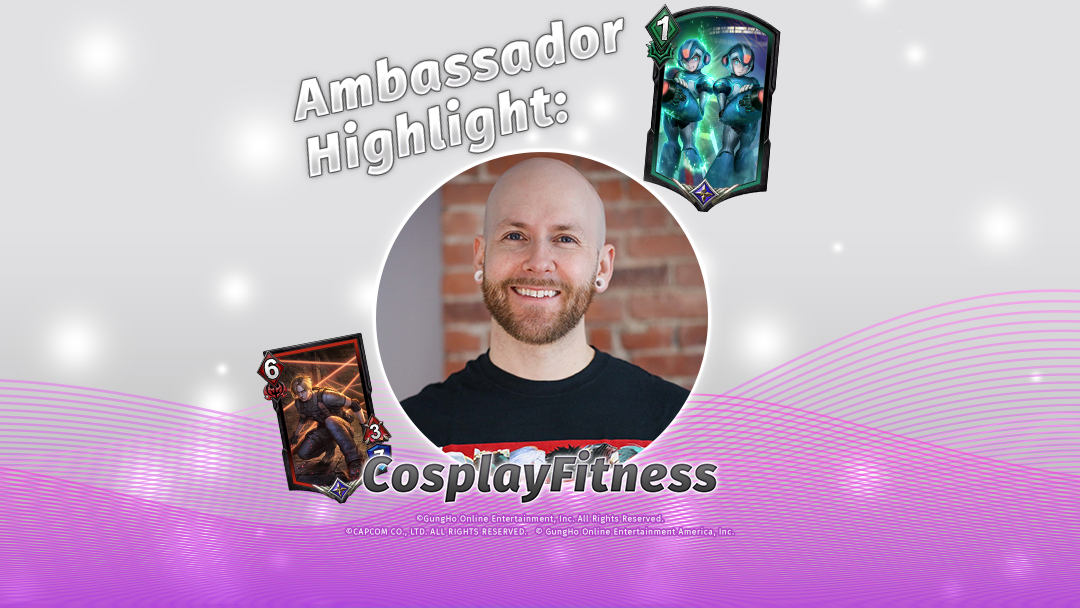 CosplayFitness is a Twitch streamer and TikToker who covers fighting games, fitness, and TEPPEN! As a Capcom fan, he fell in love with TEPPEN and has become a prominent member of the community. Read about how he started TEPPEN and why he became a GungHo Ambassador!

How did you start your career as a content creator/streamer and what kind of streams do you do?
I started watching streams/videos for gaming content around the release of Marvel vs. Capcom 3. I started to really enjoy the fighting game community, especially Capcom fighting games. I became a huge fan of Maximilian Dood, who at the time was creating video tutorials on YouTube.

I began to watch more large-scale tournaments and decided that I wanted to create my own content that revolved around hosting/casting high-level fighting game content. I had my first Twitch stream in April 2019, which was mostly focused on Super Smash Bros., but through watching Maximilian Dood, I learned about TEPPEN and had my first Twitch stream of TEPPEN in May 2020, which led to me becoming a Twitch Affiliate.

What is your favorite GungHo game?
My favorite GungHo game is TEPPEN. As I stated before, Maximilian Dood was talking about this amazing Capcom card game called TEPPEN. He highlighted the beautiful artwork, the real-time design, and how quickly you can get into matches. This game was incredibly rewarding and addicting because you get many rewards for completing Quests daily, and you quickly get into and out of matches with ease.

What kind of tips do you have for someone who just started playing TEPPEN?
If you are just starting out today playing TEPPEN, there are a lot of amazing additions to the game which will make it easy to learn. I would highly recommend playing single-player mode, playing through all the tutorials, learning what each ability of all the cards do, and building a foundation there. You can unlock many card packs for free by completing all the tutorials, Missions, and daily Quests. Also, if you have a friend that plays TEPPEN, or if you go into one of the amazing Twitch streams of the other Ambassadors, I'm sure you will find people there willing to give you a top-tier deck to start with.

How did you become a GungHo America Ambassador and what do you like the most about it?
Many of the other TEPPEN content creators that I watched on Twitch were already Ambassadors and they were very transparent about the process of becoming one. I asked them if I could become one too because I have a huge passion for the game.

The most amazing thing about being an Ambassador was being able to show off my commentary skills in a professional setting for the World Championship Series. I've met many wonderful people who take the side of production and commentary very seriously and it is inspirational to work alongside them.

Do you have any goals as a content creator/GungHo America Ambassador and motivations for streaming?
I've achieved most things I've wanted to achieve by being a GungHo America Ambassador. My only current goal would be to remain relevant in the scene, show my love and appreciation for the TEPPEN community, and continue to work alongside the other amazing Ambassadors and GungHo representatives.

I would like to become a Twitch Partner in the near future. I built a good following through TikTok/Twitch and I would like to continue to grow while sharing my love and passion for the TEPPEN community. Hopefully, I can inspire some new people to join along the way.

Any advice for someone who wants to become a content creator?
The most important thing to do is start! Your first stream/video will be terrible. The lighting will be wrong, the sound will be bad, and anything can go wrong BUT it's ok. Watch your own content, see what you liked and keep doing that. See what you did not like and learn how to change it or improve it.

The entire journey of content creation is one where you will be learning every day. Don't be intimidated by other content creators that have been doing it for years and compare yourself to them. You will grow at your own pace and everyone starts somewhere.