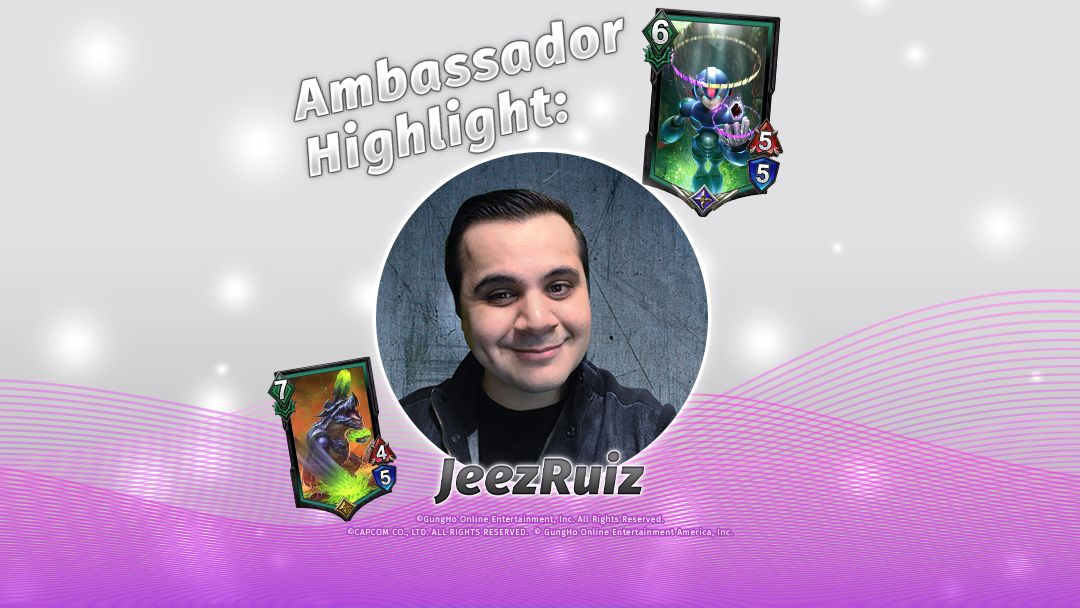 JeezRuiz, AKA TheThirstyGames, is a variety Twitch streamer focusing on platformers and fighting games. He is a prominent member of the TEPPEN community and most known for hosting community tournaments. Read about how JeezRuiz started streaming and what goes on in planning all the tournaments!

How did you start your career as a streamer and what kind of streams do you do?
I started streaming eight years ago when I participated in Extra Life, a fundraising event that I still participate in every year. Back then I had streamed on a different Twitch channel before I made TheThirstyGames.

TheThirstyGames was a channel that I made a year later and it was planned to be a monthly stream where I would invite friends on and have drinking rule streams. Eventually, I left my original channel behind and put all my time and focus into streaming on TheThirstyGames. While I kept the Barcade aesthetic and feel of the channel, my streams these days are more freeform and focused on fun for myself and the viewers.

What is your favorite GungHo game and why?
TEPPEN! Card games were always something that interested me but I've never been a fan of turn-based game style. TEPPEN is great for me because it brings all the deep and complex design of card games but adds real-time action gameplay adding new depth and strategy to how you would play compared to a traditional turn-based card game.

I learned about TEPPEN through general osmosis from all my social media followings since I am a huge Mega Man series fan, specifically Mega Man X. Once I learned X was in the game I knew I had to download and start playing as soon as I could.

Do you have any tips for someone who just started playing TEPPEN?
For new players of TEPPEN, I recommend starting out with a character you like and trying to create your first decks based on a single mechanic that interests you. A lot of the top decks in TEPPEN include a mixture of mechanics that were added in over the game's lifespan and it can be confusing trying to learn all of those mechanics at once while still learning the basics. Also, I recommend checking out any TEPPEN streamers on Twitch. The community for this game is very strong and you'll always find veteran players willing to help new players out.

Originally, I was pretty sporadic on when I would host these tournaments but I'm pushing to have a monthly tournament with a new format each time. For planning these tournaments I take a look at the meta that's currently going on in TEPPEN ranked and try to come up with a format that I think the players would enjoy and bring new ideas to deck building which in turn would be fun for the viewers to watch. It doesn't always work out (Thanks Takeda Shingen and your Furinazan explore for ruining the TEPPEN Unit Only 2 Meta) but it's something I'm doing my best to learn from every tournament to make the next one better. Once I have the format it's become a simple process of creating the signup page, explaining the format, and then promoting to the players to join the tournament. I also wanna give a shout-out to the TEPPEN community as we always have great people willing to offer their time to provide live commentary to these tournaments or help me out in the back end.

Do you have any goals as a streamer and GungHo America Ambassador?
My focus as a GungHo America Ambassador is to continue to create content that the viewers enjoy for TEPPEN and ultimately bring more players into this great community. Lately, I've also been shifting my focus from trying to be a competitive player in TEPPEN to focusing on being a tournament organizer. I'd like to continue down this path and host bigger and larger tournaments with formats that give a fresh spin on the game.

My goals as a streamer outside of TEPPEN are much smaller. I just want to keep playing games and while hanging out with the great people I've met through streaming and continue to meet cool new people. While I wouldn't complain about hitting Twitch Partner, my goal is always to have fun and hope the viewers have fun along with me.

What are your motivations for streaming?
As mentioned before, my first time streaming was for Extra Life. I participated in Extra Life because I love playing games and playing games to raise money for children's hospitals sounded like a win-win all around. What I didn't expect was that I enjoyed streaming the event much more than I thought I would, also I had just purchased a lot of equipment for the event so it made sense to continue streaming games.

I was just enjoying doing something I love and sharing that time with people online, some people that I'm meeting for the first time, and sometimes people that I haven't talked to in years and was now reconnecting with through streaming. That's where my motivation for streaming comes from, just playing games and hanging out.

Anything else you'd like to mention to the readers?
Play TEPPEN, buff X, and join the TEPPEN tournaments! Also, thanks for taking the time to read about me and I hope to talk to any of the readers in Twitch Chat.