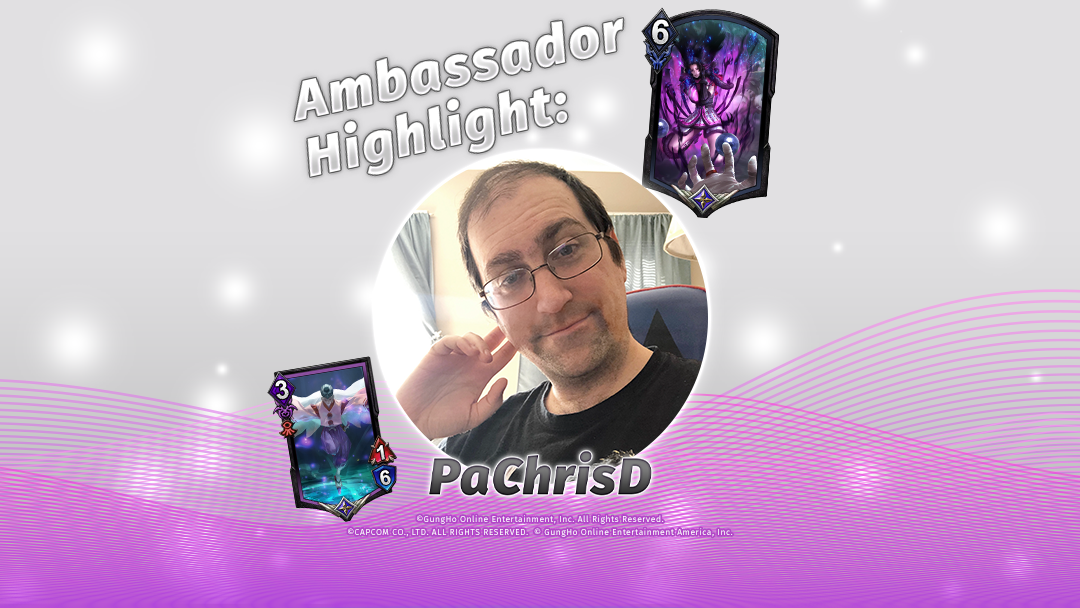 PaChrisD, or more commonly known as Chris D, is a competitive TEPPEN player who has been consistently making it to day two of the World Championship Series 2021 (WCS2021) online tournaments. He is also a dedicated TEPPEN streamer, which he has been streaming for almost as long as the game has been out. Learn why Chris D is so hooked on TEPPEN and how he prepares for the tournaments.

How did you start your career as a streamer and what kind of streams do you do?
For the longest time I've wanted to stream. I did some spontaneous PS4 streams and while those were fun, I don't really count those. The few things holding me back were not having a proper PC setup for streaming and also not having a game I could really identify with that I really wanted to stream on the regular. Once TEPPEN came out, I watched other streamers in the first month or so and kept thinking "maybe it's time to do it." I was at a unique point in life where I did have extra time for it, so I decided to jump in and start broadcasting with my budget laptop stream setup.

My goal when streaming is just to make sure everyone is entertained. I want to provide fun, informational, and exciting moments. I do what I can for the followers since I wouldn't be here if they weren't also here with me.

What is your favorite GungHo game and why?
TEPPEN! I first got into card games after playing fighting games for a majority of my life and enjoyed playing on my phone for the past few years as well. I first heard of the game when it was being shown off by various content creators like Maximilian Dood and Justin Wong, and it immediately had my attention. I knew TEPPEN would be my game because it had Capcom characters I know and love as well as an exciting card based action packed foundation.  I couldn't resist trying it out, and I've been hooked ever since.

Do you have any tips for someone who just started playing TEPPEN?
For anyone trying TEPPEN, I can recommend having patience and making the most of your time. Try not to worry about what the other side is doing, focus on what you're doing first and think out your plays before seeing what they're trying to do. Learning every card sounds like a daunting task in the beginning, but it becomes easier over time with enough familiarity as well as experience. Don't fixate too much on what the "top decks" are currently or what looks unstoppable. Play what you feel suits your style best and work with it until you feel confident and more understanding in how the game is supposed to be played. Also the action phase gives you 10 extra seconds to think, use that time wisely!

You've consistently been in the top eight for the past online tournaments of the WCS2021, what are some things you do to prepare for yourself before matches? Will you be participating in the June qualifiers?
Yes, I will be in the qualifiers this month, and I hope I can make it back to the main stage again! When it comes to tournament time, a lot of it can come down to matchups. With the game having such strong color identities/archetypes, it's natural for everything to have at least one counter deck that works against what you're trying to do. So when you make a lineup of three decks, your goal is to be able to win with at least two of them in any situation. However since there's a wide variety of strong decks in the meta, it's hard to pick a set that can beat everything. One way I look at it is you should bring your strongest deck no matter what - the one deck you feel most confident in playing and have the best experience with. Another deck should cover your strongest deck's weakness, you might have to practice the most with that one. The third deck can either reinforce your strengths or act as another cover. You could even bring a deck that potentially scares away your opponent from picking something you don't like going up against. I'd rather go with three decks I know I can win with while also being mindful of the potential tech choices I can include, and these can help make certain matchups against popular decks more winnable.

How did you become a GungHo America Ambassador and what do you like the most about it?
I became an ambassador last year right around the time we were getting new card reveals for “The Tale of Amatsu no Kuni.” I was fortunate enough to get a reveal (Black Imp!) as well as some other friends of mine who are also Ambassadors. It was a personal goal to become an Ambassador for TEPPEN so I was really excited when it finally happened. I really like the friendly atmosphere of the community and how engaging everyone has been, and I've always wanted to be a part of that too. Glad to be on board!

What are your motivations for streaming?
I've treated streaming mostly as a hobby. When I'm winding down after work and trying to relax, I feel like streaming can be one way to have fun and share with the community who might be needing someone to watch at the time. Knowing that people are excited to see me online means a lot, and I'm always trying to find a way to show my appreciation in turn.

Any advice for someone who wants to become a content creator?
Just do it! I was so scared at first of how I would be perceived or how my stream quality looked and it seems so silly when I think about it now. If you keep at it and just have fun, you'll be appreciated by someone out there. Don't concern yourself with the size of your audience or if you're good enough to compete with the rest; there's room for everyone! Consistency is key.

Anything else you'd like to mention to the readers?
Thank you to everyone that continues to support me! All the subscribers, the chatters, the lurkers, I see all of you and it means so much to me that I can have a generous audience where I get overwhelmed with emotions sometimes. For all the new folks just hearing of me, hopefully I left a good impression!

Want to learn more about PaChrisD? Follow his social media and channels to never miss his streams!
Twitter / Twitch