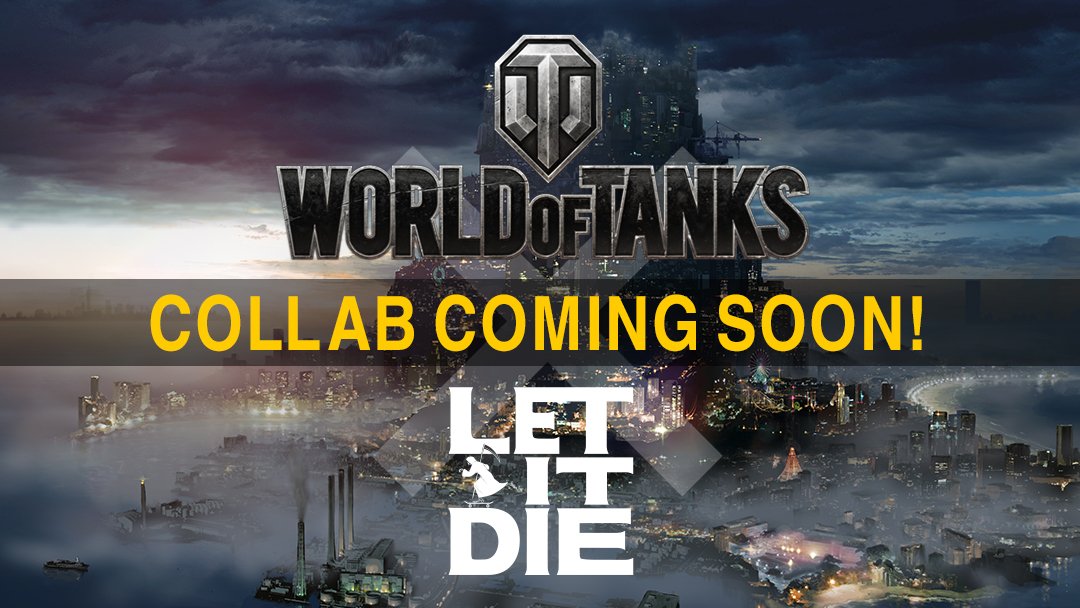 Wargaming APAC Director of Publishing Strategy, Ozan Kocoglu, said “We are incredibly excited about this collaboration with GungHo and Let It Die, as it will be the first time in Wargaming’s history, that World of Tanks will feature in a title, outside of the Wargaming franchise. This is an example of the phenomenon that has become World of Tanks, which now has over 130 million players worldwide.”

World of Tanks is a team-based massively multiplayer online action game dedicated to armored warfare of the mid-20th century. Players are able to throw themselves into the epic tank battles of World War II utilizing hundreds of vehicles in battle sites around the globe.

LET IT DIE continues bringing vast amounts of content for players such as BLACK THUNDER, the third of four FORCEMEN revealed via livestream and the newest updates to Tokyo Death Metro, the game’s asynchronous multiplayer mode. Back in April, LET IT DIE debuted the first of four FORCEMEN, WHITE STEEL, in a livestream outlining major changes coming to LET IT DIE in the second half of 2017. Meanwhile, RED NAPALM was revealed as a follow up FORCEMEN in July.

LET IT DIE has passed three million downloads in North America, Europe, and Japan.
LET IT DIE is available for download from the PlayStation Store.

ABOUT LET IT DIE
From Grasshopper Manufacture, the creative minds behind Lollipop Chainsaw and No More Heroes comes LET IT DIE! Die to survive in this free-to-play hack and slash survival action game. Set in a post-apocalyptic Japan, players start with little more than their undergarments and must forage for powerful weapons and armor to do battle with the over-the-top ultraviolent future that waits. LET IT DIE is a PlayStation®4 exclusive title available now and has been downloaded over three million times.

ABOUT WARGAMING
Wargaming is an award-winning online game developer and publisher and one of the leaders in the free-to-play MMO market. Founded as a privately held company in 1998, Wargaming has shipped over 15 titles. Currently, Wargaming is focused on its team-based MMO war series dedicated to the mid-20th century warfare that includes the armored World of Tanks, the flight combat World of Warplanes, and the naval World of Warships. The three intertwined titles form a common gaming universe integrated within the portal www.wargaming.net. As part of its multiplatform line-up, the company has introduced World of Tanks on Xbox and World of Tanks Blitz on mobile platforms, Windows 10 PCs and Mac OS X. Launched in 2014 and 2015, World of Tanks on Xbox introduced epic tank-on-tank battles to console gamers and offers the first cross-platform gaming experience between Xbox 360 and Xbox One. In 2016, Wargaming released World of Tanks for PlayStation®4, continuing its console campaign. Official website: http://www.wargaming.com.