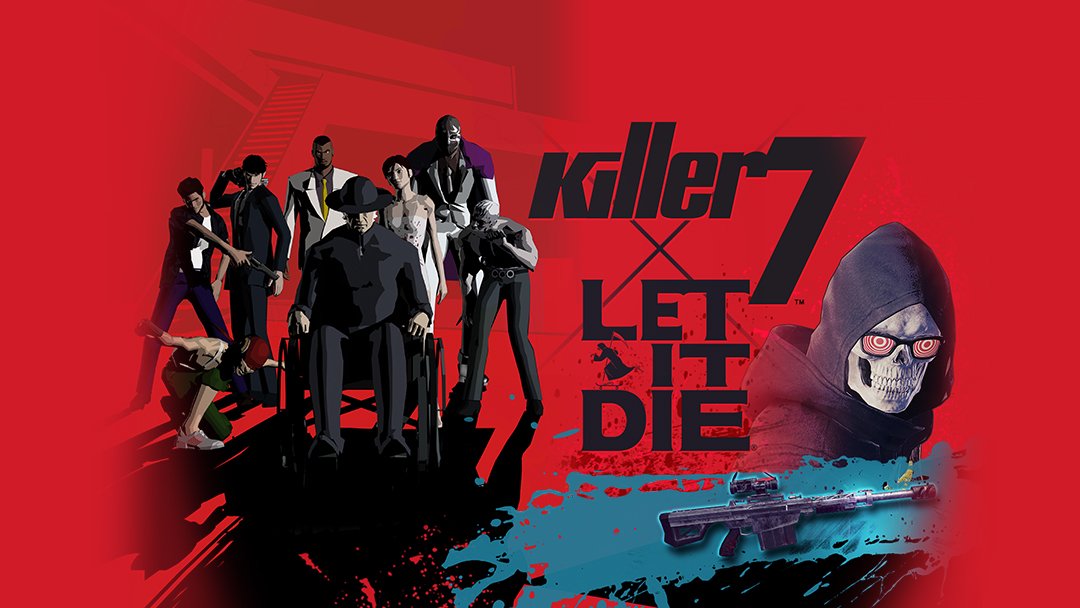 Between April 25 (10:00 PM PDT) and May 24 (3:00 AM PDT), players can integrate the world of Harman Smith and the killer7 into LET IT DIE with collab exclusive weapons, character-based decals with interesting effects, special limited-time quests and rewards, and even an additional track to the Waiting Room Radio.

The blueprint for Harman Smith’s special weapon, the GLIDER, will be available as a reward for completing a special event quest during the collab period. Players can find out more details on the various collab-specific quests by talking to Naomi Detox in the Hated Arcade.

Those familiar with the soundtrack from killer7 will be able to tune into a special station on the Radio to have the classic BGM track “RAVE ON” play in their Waiting Rooms.

Special collab decals featuring characters like Harman Smith, Samantha, Mask De Smith, Iwazaru, and many others can be purchased with Death Metals at the Mushroom Club. The killer7 Decal Collection will feature a special function allowing players to get one of 10 collab decals at random without the chance of pulling a duplicate. For the full lineup and decal effects, players can view them at the Mushroom Club during the event period.

LET IT DIE is available for download from thePlayStation Store.

ABOUT LET IT DIE
From Grasshopper Manufacture, the creative minds behind Lollipop Chainsaw and No More Heroes comes LET IT DIE! Die to survive in this free-to-play hack and slash survival action game. Set in a post-apocalyptic Japan, players start with little more than their undergarments and must forage for powerful weapons and armor to do battle with the over-the-top ultraviolent future that waits. LET IT DIE is a PlayStation®4 exclusive title available now and has been downloaded over four million times.

For more information on LET IT DIE please visit:

ABOUT KILLER7:
killer7 was developed by Grasshopper Manufacture, led by Suda51, and published by Capcom in 2005. Players control the 7 multiple personalities of the assassin Harman Smith. These real-life unique manifestations of Harman Smith’s personalities make up the elite assassin squad “killer 7” who through their missions learn that the U.S. Government who hired them, may have much darker secrets than the jobs that these assassins were hired to carry out.
ⓒgrasshopper manufacture Inc. 2005, ⓒCAPCOM CO., LTD. 2005 ALL RIGHTS RESERVED.