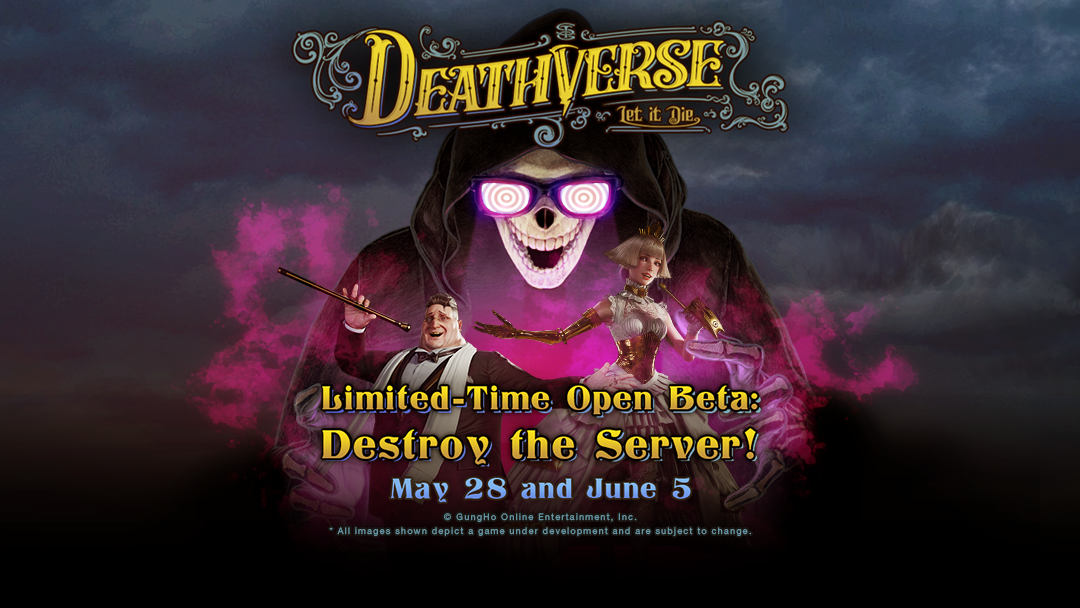 TOKYO, Japan – May 18, 2022– GungHo Online Entertainment and SUPERTRICK GAMES will kick off an open beta for its upcoming multiplayer survival action game DEATHVERSE: LET IT DIE on May 28 from 1-7 p.m. PDT and June 5 from 1-6 a.m. PDT. PlayStation 4 and PlayStation 5 players can pre-download the game today from the PlayStation Store and test their survival skills in this Limited-Time Open Beta: Destroy the Server! The beta will be available in multiple languages and regions.

Fight to Survive
In DEATHVERSE: LET IT DIE, players compete in a 16-player survival battle arena as a contestant in the world-renowned television program Death Jamboree. Flanked by your trusty robot companion, Wilson, you must fight off player-controlled and CPU enemies in PvPvE mayhem.

To give the fans a dramatic final battle, the Showdown Zone opens toward the end of each match. Duke it out one-on-one to be the last competitor standing in this restricted area.

Welcome to the Jamboree
In 2026, society collapses following a seismic calamity known as “Earth’s Rage.” Scarred by the horrors they’ve faced, a fractured humanity fulfills their need for bloodshed with a deadly reality show: Death Jamboree. Anyone can compete to win fortune and favor, but remember: no one makes it to the top without getting their hands dirty.

Tell Them What They’ve Won…
Everyone who participates in the Limited-Time Open Beta is a winner… at least when there are free bonuses involved. Jump into the beta to “destroy the server” and earn a TEST PILOT title, a “T” Pose Emote, and a Premium Uncle-D2 Decal. Additionally, those who’ve reached the fourth level of the Tower of Barbs in LET IT DIE will receive the coveted title of SENPAI.

ABOUT SUPERTRICK GAMES
SUPERTRICK GAMES, a studio of GungHo Online Entertainment, was established in 2013 by Shuji Ishikawa, Shin Hideyuki, and the development team behind the hit survival action game LET IT DIE. With over seven million lifetime downloads, LET IT DIE continues to be supported by the team. Now, SUPERTRICK GAMES is taking on a gloriously gorey new project to expand the franchise: DEATHVERSE: LET IT DIE.