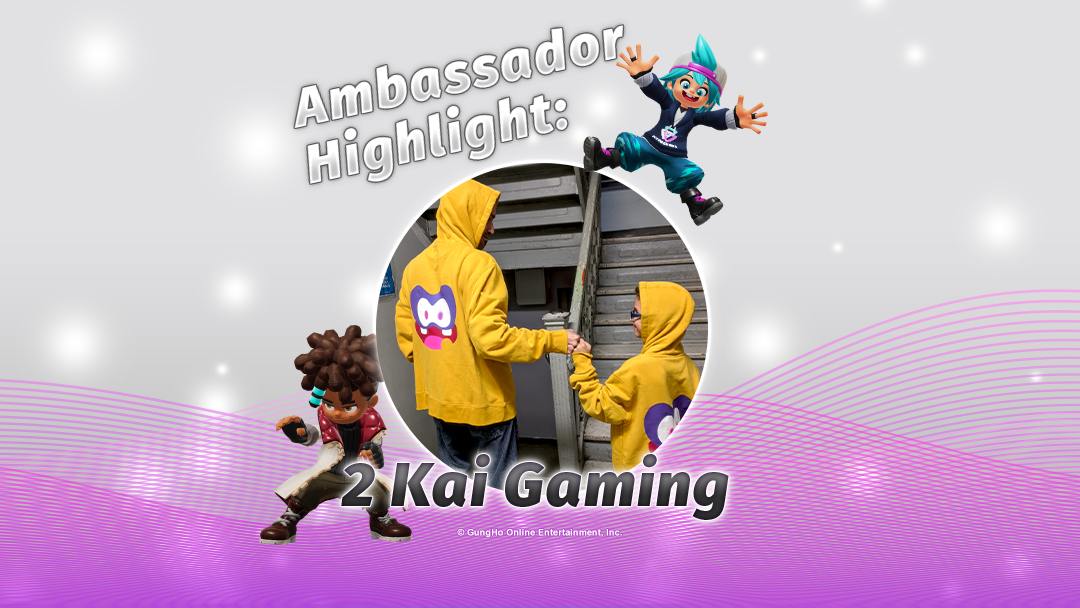 Meet 2 Kai Gaming, a father and son content creator duo and GungHo America Ambassadors for Ninjala! Kai and his nine-year-old son, Little Kai, love to do everything together, especially playing games. Together they started their YouTube channel and use their creativity to share their passion for video games. Read how they started playing Ninjala and what their future goals are!

How did you start your career as a content creator and what kind of content do you create?
Kai: We started making content in October of 2019.

Little Kai: We made a video playing a game called Bulb Boy, it's a horror game. I was so nervous when we started recording.

Kai: We both were nervous. We started doing it out of curiosity and boredom, and Kai had wanted to make a YouTube channel. I figured since I enjoyed editing videos, why not. We mostly make gameplay content, but sometimes we'll make a montage video, a YouTube Short, and we'll even bring some music to the channel when we can. We try to keep it growing with variety. Also, for the sake of not getting bored with what we do, and hopefully, bring something different to the viewers whenever we can.

What is your favorite GungHo game?
Little Kai: Ninjala, because of the battles, and the new modes they added. I really like the WNA Resort because you get to meet people, use Emotes with them, take pictures with them, and have fun with everyone. It's a nice place to be in when you're not battling.

Kai: Ninjala. We first saw it back in 2020, in a video showing upcoming Nintendo Switch games. There was a short trailer of Ninjala, and we loved the look of it; the movement style, the ninja theme, the weapons, wall-running, disguising yourself, jujutsu, literally everything about it. It looked like a really interesting and unique game, and we couldn't wait to play it.

Little Kai: I was really excited when my dad showed me Ninjala and told me we could play it online with other people. It looked so cool seeing players in the video running on walls and the weapons they were using. I couldn't wait for the game to come out.

Do you have any tips for someone who just started playing Ninjala?
Little Kai: Attack Drones to help you get stamina for your Dashing and Bubble Dashing because that'll help when you have to move around fast and fight other players, and make your big weapon. Keep looking around for other people so you don't get hit when you're getting Drones, too.

Kai: Ninja Cards. They're going to help you A LOT. Check them out and see what's going to help your play style. Also, make sure to be patient with yourself and the game when you're playing. No one becomes a ninja in the first few matches, you're going to need to practice.

Little Kai: A Lot of practice, especially in air battles and dashing around. We practiced A LOT when we started. It felt hectic in the beginning, and it's going to feel hectic to new players, that's normal. But once you find your pace in the game, how you want to play it, and a weapon you feel good with, things are going to click, and you'll start to feel comfortable with the game.

How did you become a GungHo America Ambassador and what do you like the most about it?
Little Kai: We made a tutorial video for Ninjala, and GungHo saw it and they asked if they could feature it in one of their videos. Then they asked if we would like to be Ambassadors for them.

Kai: We made a "Beginner's Guide" to the game after its release, hoping it would help out new players who might've felt lost in the game like we did, because we felt a little lost in it when we started, too. We're not pros, but we DO know how it feels to play the game, you're having fun with it, but also feeling lost because of how fast and hectic it can get. We love that about it, but it can feel off-putting to new players. We wanted to let them know that they weren't alone, try to help them understand what's going on, and show them the basics and what they can do in the game.

Little Kai: I felt so lost in the beginning because it was really fast and crazy, but I was having fun the whole time, and the video was fun to make, too. Now we could help people who started playing the game.

Do you have any goals as a content creator and GungHo America Ambassador?
Kai: Just to keep making videos and streams for everyone since we've been having a lot of fun with it over the past couple of years. It's great to make videos and share them with people. On the streamer side, it's a lot of fun to interact with the viewers during the streams, and we want to keep that going, too. If our content ever gets us a nice house one day, THAT would honestly be our ULTIMATE goal. Seriously, we need space.

Little Kai: I want a house, too. Having our house would be a really nice goal. I have a lot of fun making the videos for our channel and sharing them. I like streaming, too, because we get to play some games with people who are watching, we get to talk with them, and we have a lot of fun doing that. We treat everyone in our streams like they're good friends, so they feel welcomed.

Kai: We're going to continue making content for Ninjala, continue with the blooper series with the players, and turn our Ninjala streams into content. We've also had some ideas for added game content, and it would be amazing to see those added to the game one day, if possible. We think players would really like our ideas for it and what it would bring to the game. Maybe we could do a DJ event at the WNA Resort one day for everyone, too. We'd love to do that for Ninjala and for the players to chill at.

Little Kai: A big Ninjala party! That would be awesome. Seeing our ideas in the game would be really cool, too.

What are your motivations for creating content?
Kai: Family. Friends. Having fun recording gameplay with (Little) Kai. Trying to get faster at my editing. Getting better at what we know and learning what we don't, so we can grow in what we do.

Little Kai: My family and my friends, having fun in our videos when we record, and being able to see our videos online on our channel is really cool.

Any advice for someone who wants to become a content creator?
Kai: Just be yourself and work with what you have while you're growing. Be patient learning to edit and stream, too. They're not the same thing, but they both have their learning curves depending on what you want to do, and it's going to take some time to learn and see what works for you. It all takes time when you're starting and doing it all on your own, so give yourself time so you don't burn yourself out. Also, make content you enjoy making, because if you're not into it, it'll show in your work. It's great to make content for others, too, but don't forget about yourself. Work comfortably, too. We love doing the videos and streams for everyone, but wow, the equipment we use takes up A LOT of space around us when it's all set up.

Little Kai: It does take up space. We have to put a lot of it away when we're done and setting it up takes up time before we're ready. But it's worth it because I really enjoy recording videos and doing streams.

Anything else you'd like to mention to the readers?
Kai: Just thank you, to all the readers, the subscribers on our channels, the followers on our socials, our family and friends for their support, the Ninjala community, and the players who submitted clips for the blooper series, especially for their patience in making those blooper videos, and GungHo for the opportunity to be Ambassadors for them.

Little Kai: We're really thankful to GungHo and everyone who watches our videos and likes them. I love making videos and knowing that people enjoy watching them. It's been so much fun doing this and getting to know so many cool people and players. I hope we become big YouTubers, too, and then I can buy a house for us.

Kai: You can be a famous YouTuber and I'll edit your videos. Deal?