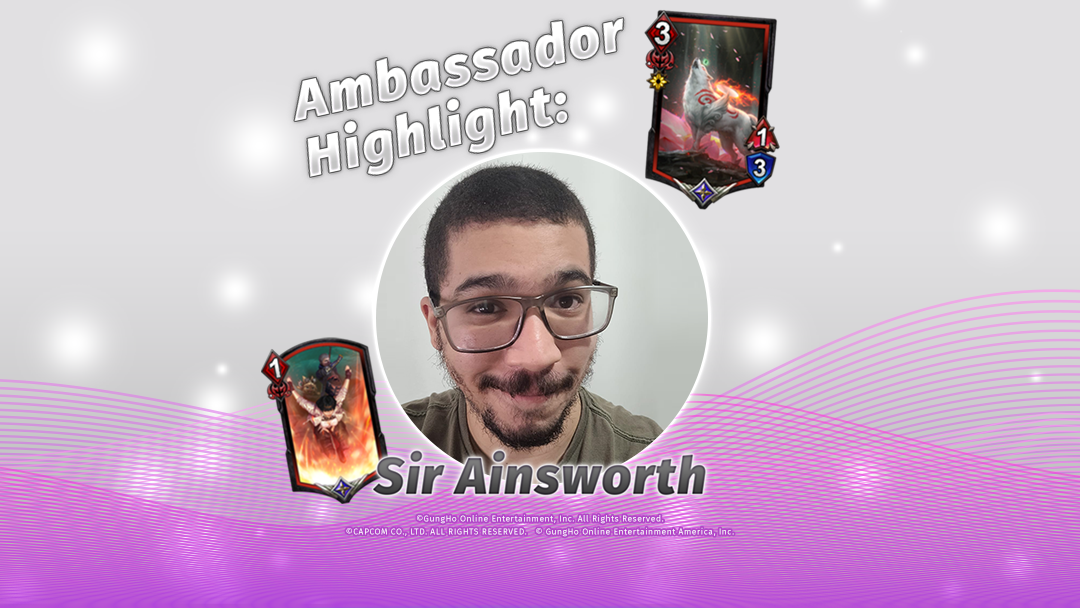 Sir Ainsworth, AKA Rank Dropper within the TEPPEN community, is our very first Brazilian TEPPEN Ambassador. His passion for games, especially TEPPEN, inspired him to begin streaming and play competitively. Read more about how hyped SirAinsworth is about the recent launch in Brazil and becoming a TEPPEN Ambassador!

How did you start your career as a streamer and what kind of streams do you do?
I started streaming back in February 2021 without even having a PC, directly from my phone using Twitch's mobile app. I've been mostly a TEPPEN streamer, and with its community support along with me winning a couple of community tournaments, I was able to finally build a PC to stream some other games and upgrade my streaming setup.

What is your favorite GungHo game?
So far I only ever tried TEPPEN so I can't say anything about the other games, but I love TEPPEN and how it almost feels like a fighting game inside a digital card game with both players using cards without having turns. I don't really remember how I got to know about the game back in 2019, but since I've always been following channels about upcoming mobile games, I probably saw TEPPEN in one of those.

Do you have any tips for someone who just started playing TEPPEN?
Since the game has gotten a bunch of expansions, it might be overwhelming at first, but if they are patient enough to learn the game, it has a pretty nice PvE mode called Chronicles with different missions against bots along with some tutorials where you can get to know some of the key strategies and keywords of the game. Also, Standard Mode Ranked only uses eight sets at a time so it might not be that hard to get into compared to Unlimited, where all cards are usable.

How did you become a GungHo America Ambassador and what do you like the most about it?
I've been streaming TEPPEN for a while producing content, mostly dropping ranks on stream while having some fun with chat, and was reached out to by one of GungHo America's community managers for the opportunity. I love to be seen as an official spokesperson for the game since I've been actively trying to improve the community experience with the game, and I'm super excited for what events GungHo planned that I might be able to participate in.

How do you feel about TEPPEN launching in Brazil and also being the first Brazilian TEPPEN Ambassador?
As a fan and as someone who's been playing the game since its launch back in July 2019, it was one of the news that made me even more excited about the game especially because I couldn't get some of my friends into the game. Even if they do not know much English, I can at least try to help them understand how the game works while having an official way for them to install the game. It's also my first time being an Ambassador for anything and I couldn't be happier that it is for something that I like so much, a game that finally made me love the stressful competitive scene of a card game. I appreciate how amazing the community we built around this game is, and wouldn't be able to receive this opportunity without the love and recognition from so many friends that I made through this game. I will do all I can to spread the word and build a Brazilian community for TEPPEN and I'm very optimistic for the future of the game and what new events and campaigns might be planned.

Do you have any goals as a streamer/GungHo America Ambassador and motivations for streaming?
My goal is to be seen as a reliable and fun source of TEPPEN information and content.

I stream because the last few years have been rough for both my physical and mental health, and being able to play games I like with people that I enjoy talking with makes everything much better.

Any advice for someone who wants to become a content creator?
When I started, I decided that I should stream whenever I feel like and whatever game I'm having fun with, no matter what brings in the viewers or not. If you are not having a fun and healthy experience, then it's not really worth your time

Want to learn more about Sir Ainsworth? Follow his social media and channels to never miss his streams!