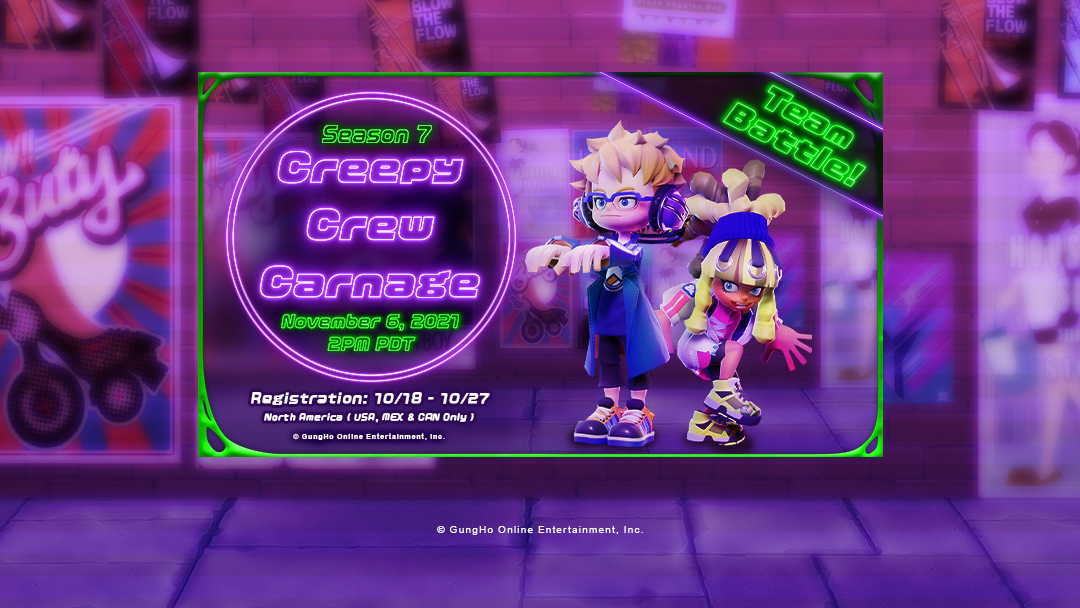 Crawl On Over to Register for the Creepy Crew Carnage: the First NA Ninjala Team Tournament!

We rise from the dead with another Ninjala tournament named with clever alliteration! Introducing the Creepy Crew Carnage! That’s right, gather your crew because we’re doing our FIRST NA Team Tournament. Registration will run from 10/18-10/27.

So PlayNinjala, how’s this gonna work?

Thanks for asking, here’s how it’s going to work. We’re accepting teams of four for this tournament, up to eight teams will be selected bringing us to a total of 32 players. Similar to our previous tournaments, the final bracket will be randomly selected via lottery.

Registration will be open from 10/18 (Mon) 4:00AM – 10/27 (Wed) 7:00PM (PDT). Only the Team Captain needs to register the whole team in the registration form and is responsible for registering all the players in their team.

Teams are allowed to register up to one alternate player in the case one of their team members is unable to play on the day of the event. If you would like to substitute one of your starting members for an alternate, you must let us know by one hour prior to check-in. Alternates cannot be subbed in at any other time during the event. Alternate players will not be considered for prizing unless they play in the event.

Early rounds will have two battles each, with the four highest point totals moving on to the next round. The final round will have three battles instead, but use the same scoring format.

Ok cool, but what about prizing? What’s in it for us?

Boy do we have an interesting line up for you~

*Gift card totals are for the entire team. Each player on the team will receive 1/4th of that total.

Wowee! What about Eligibility Requirements?

As this is a North American Tournament, only residents of the US, Mexico, or Canada can participate. This time around, we’re looking for Ninjas 14 and up, everyone under 18 must have parental permission to participate! If you’re selected, you must be able to use Discord, communicate in English, and are willing to appear on the official broadcast or official images. You can check out the detailed rules and regulations on the official site!

If you think you have what it takes to become the CCC-Champions, register after reading the rules on the official site: https://ninjalathegame.com/en/news/info/cccwebsite.html

Don’t forget to follow Ninjala’s official social media accounts to get all the latest information on the CCC and Ninjala news.