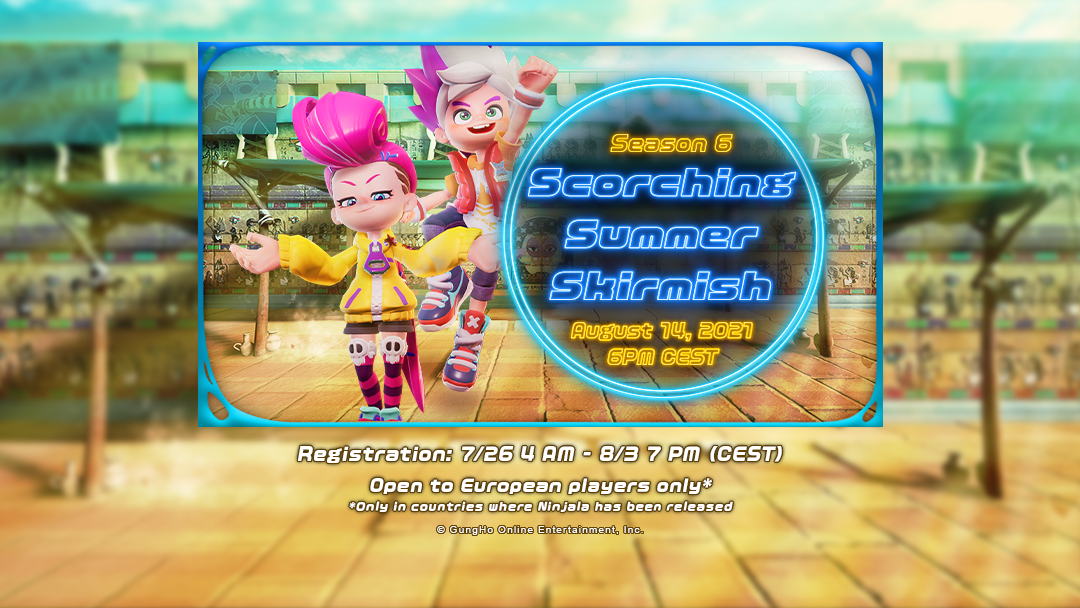 European Ninjas, it is your time to shine in the Scorching Summer Skirmish (SSS)! That’s right, we’re bringing our alliteratively named Ninjala Tournaments across the pond. Do you have what it takes to become the first EU Ninjala Tournament Champion?

Great! What are the deets?

Registration is FREE and is open from 7/26 (Mon) at 4:00AM until 8/3 (Tue) 7:00PM (CEST) for residents of European countries where Ninjala is available*. The tournament takes place on 8/14 (Sat) 6:00PM (CEST) and will be in Battle Royale. Just like our previous tournaments, 32 participants will be selected via lottery. Early rounds will have two battles each, with the four highest point totals moving on to the next round. The final round will have three battles instead, but use the same scoring format.

Oh, and we’re bringing back the extra 1000 point bonus for the IPPON Master award winner (or winners) in every round. We want to see some action!

But PlayNinjala, what will the prizes be like for the EU community as we are a vast continent?

Funny of you to theoretically ask, because we thought long and hard about this! Top 4 will be receiving the cash prizes as illustrated below and places 1-8th will all receive a Gumchi T-shirt for their in-game avatar**!

**You cannot receive another Gumchi T-shirt if you have previously received one.

Awesome! What about Eligibility Requirements?

If you want to participate in this tournament, you will have to be resident of a European country in which Ninjala is available*. Only ninjas ranked Elite Ninja or above in Battle Royale and ages 16 and up will be allowed to participate in this tournament. If you’re under 18, you will need a parent’s permission to participate. We will need some help setting up rooms on the EU server to prevent any latency issues, so if you’re selected, you must be willing to and able to create the room for the tournament match to be played on. Additionally, if you’re selected, you must be able to use Discord, communicate in English,  and are willing to appear on the official broadcast or official images. You can check out the detailed rules and regulations on the official site!

If you think you have what it takes to become the SSS Champion, register after reading the rules on the official site: https://www.ninjalathegame.com/en/news/info/ssswebsite.html

We’re so excited to be able to finally do an event for our European community. We hope to be able to do more events like this in the future, so we hope everyone will try to make this first one a spectacular event! Don’t forget to follow Ninjala’s official social media accounts to get all the latest information on the SSS and Ninjala news.