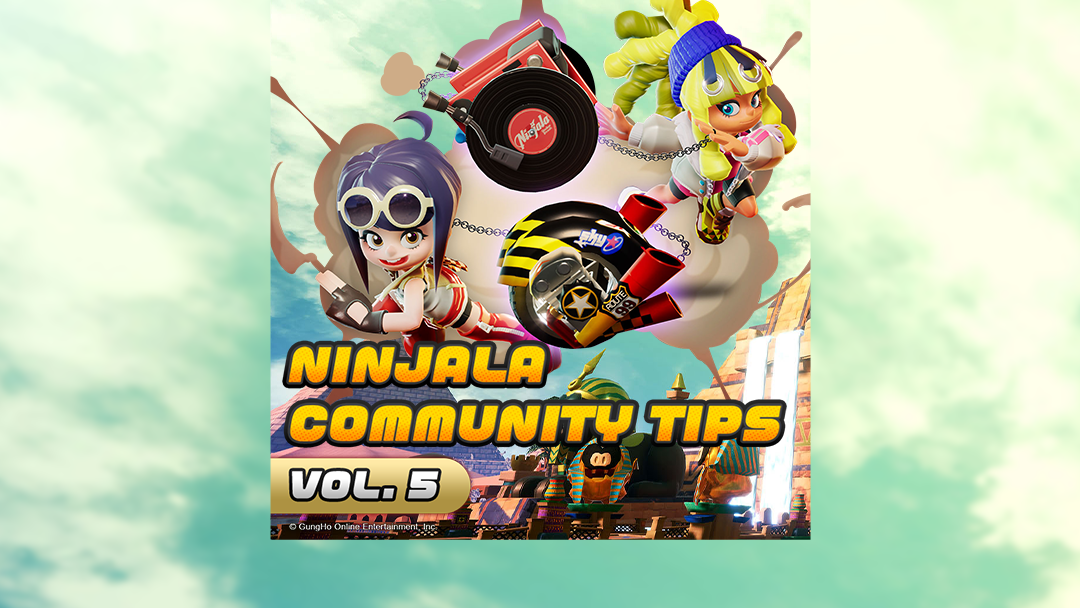 Season Six of Ninjala bolsters plenty of new things for ninjas of all kinds to enjoy, but with all these new “powers” comes great responsibility. Luckily for us, we’ve got some Super Ninjas who have lent us their knowledge to handle all this newfound responsibility. Whether you choose to use this knowledge for good or evil, we hope these tips help you in some way!

First up, we have Zapd0s letting us know that you can Hit the Set Drone mid-air, which causes it to land early, allowing you to control where it lands

Queen Jess out here with an advanced Combo video for the Extreme Motor. If you’ve got your movements down, try out this sequence of attacks:

for an instant IPPON!

If that was too advanced for you, MochiiLucy has an easy Extreme Motor combo! After you use normal attack you can jump cancel into a gum shoot and use normal attack 3 times and finish with bumpy accelerator's turbo attack for a clean ippon!

Next, we have Sandman showing us you can get the turbo boost without taking sharp turns if you drift and flick the L stick left to right quickly!

SB_Swagg99 has that ideal positioning to hit Set Drone by attacking it from above to avoid the Drone’s attacks!

HammerBubblegum has a bunch of great tips for you and we loved this thread. You can use Extreme Motor or DJ Scratch's Normal Attacks to quickly get around the map without spending any energy!

Similarly, the Back Attack can be used to quickly retreat! Both of these work best when done from the ground so that your jump keeps its momentum. Speed boosts help too!

If you want to combo into multiple hits of Special's Turbo, being above your opponent works best because they'll get launched upward into the next hit.

Having trouble turning? Shade says Press ZL (if you’re using the default controls) to start drifting. You will be rewarded with a speed boost

Additionally, Shade also lets you know that you can cancel Worst Night-Mare by pressing ZL. Perfect for a great follow up.

darkyAmador has a good way to get the drone set, (right) + ZR + cancel, take advantage of its blind spot and repeat, if the drone is attacks with its wave attack just use break attack, it won't hit you.

ToonyDream has a tip to keep your opponents off you AND valuable drones! Use Extreme Motor's special to create an explosion when attacking.

Worst Night-mare is strong, but not invincible! MayorRev lets us know that certain heavy hits, like Power Buster, will knock you off your horse

Last but not least, TheFallen has All of The new and Current locations on where to find drones in Sphinx Valley in Battle Royale!

You can find everyone from the video, in order of appearance, on Twitter here:

We hope these tips help you navigate all of the new things that were introduced in Season Six of Ninjala. How you use them is up to you, but we’re grateful for all the Super Ninjas who contributed and submitted their tips for this tips video!

Make sure you’re following the official Ninjala social channels to get the latest updates on all things Ninjala!