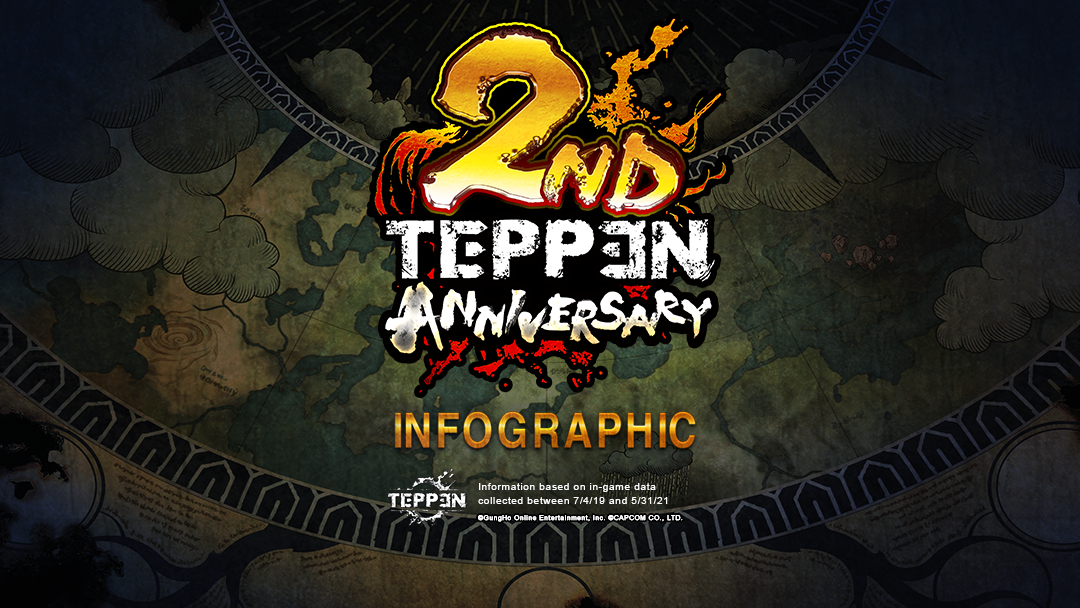 It has been two wonderful years of TEPPEN fun! But with 16 Heroes with 3 unique Hero Arts each and TONS of cards, have you ever been curious about usage statistics in these past two years? In celebration of TEPPEN’s 2nd Anniversary, we have compiled just that for you! This data reflects information collected from 7/4/2019-5/31/2021.

The Top 3 cards used in TEPPEN are all from the CORE pack, but that’s to be expected as it was available from launch and these cards are staples in either mono black/green or dual-color decks! First, we have Zombie (COR 141) which is a 3MP cost unit with <Death> and <Revenge> abilities that make it very useful in more ways than one. The second most used card is Wall Jump (COR 072) , which is an action card that grants a <Shield> to a friendly unit and, for a mere 1MP, is useful with any element despite the MP cap for multi-color decks! The third most used card is Selfish Predation (COR 173). If you ask any Black element player, one of the most important cards to have in your deck would be this one, as being able to recover your sacrificed Life can be essential to winning a battle!

The most used element since launch is Black, followed by Red, Green, and Purple, in that order. If you told anyone in Season 2 or 3 of TEPPEN that Purple is the least used element out of the four, they would have told you to fudge yourself and fudge big reso!

Now, something everyone has been looking forward to (we assume because we were also curious): The most used Heroes, ranked! Would you agree with how these Heroes are ranked or do you feel as though the first 8 Heroes have an advantage, statistically, due to being released longer? Let us know!

Have you ever wondered which Hero Art each of our Heroes have was used the most? We’ve got that broken down for you as well!

While this is a newer feature, we also included a ranking of the most popular BGM bought from the Soul Shop!

Last but not least, we have the most used Legendaries ranked for all to see! Heavenly Kicks Chun-Li (COR 071) is in first, which is commonly seen in both mono-Green and Green multi-color decks! Spreading Infection (COR 179) in second, which is very handy in <Revenge> and <Ascended> focused decks! Finally, we have Fate-Defying Ryu (COR 025) in third and despite it being a 6MP cost unit card, can still be used in Human Tribe dual-color decks!

We hope you found this insightful! If you have any suggestions for future statistics to be revealed, please let us know on TEPPEN’s socials, which you should be following if you want the latest news regarding all things TEPPEN!