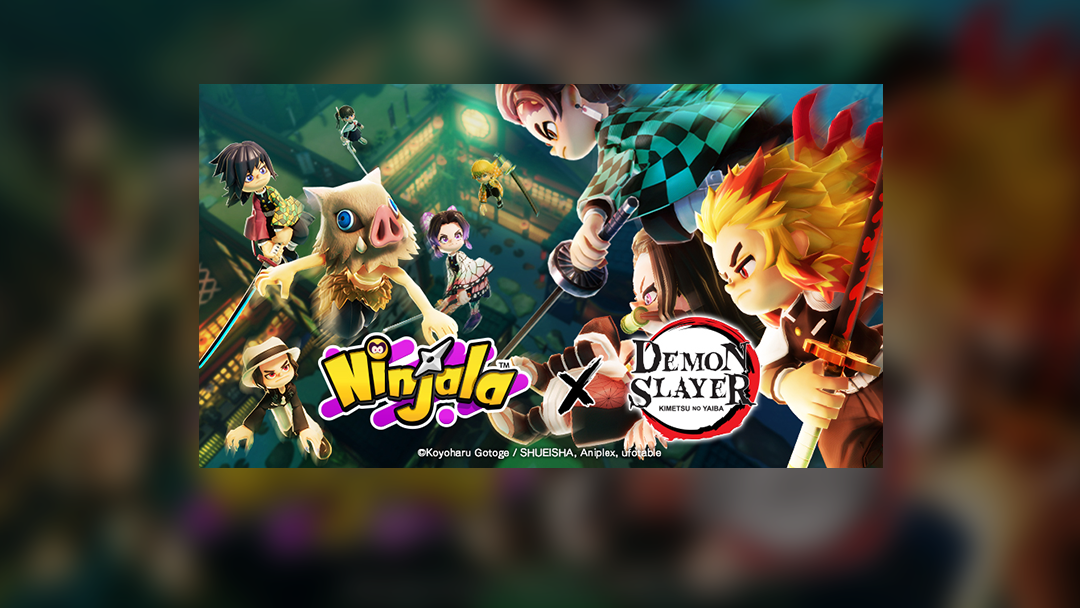 Demon Slayer: Kimetsu no Yaiba Faces Off with Ninjala in a Sharp New Collaboration

TOKYO, Japan – July 20, 2021 - Total Concentration! Demon Slayer: Kimetsu no Yaiba, the record-breaking manga and anime, has arrived into the bubble-gum brawler Ninjala in a brand-new collaboration. This is the largest collab Ninjala has ever seen, so players will have to concentrate their breathing and start gourd training to get all of the great rewards from now through August 30.

The Demon Slayer Corp has gathered its best and brightest to take part in the bubble-bursting fun! Players can get nine avatar outfits based on the series’ most popular characters.

All outfits except for Muzan Kibutsuji will be available for purchase at the Shinobi Shop for 2000 Jala each. Muzan will be available in the Collab Gacha along with Ninja-Gum weapon skins for Tanjiro, Zenitsu, Inosuke, Kanao, Giyu, Shinobu, and Rengoku based on the characters’ swords. Normal Ninja-Gum skins will also be available. Each gacha pull gives players 20 items and costs 200 Jala or 600 Gold Medals.

The world of Ninjala may not be crawling with demons, but the Shinobi Shop is fully stocked with a ton of new items, including a stylish Demon Slayer T-shirt, a Tanjiro-themed Gum Bottle skin, and nine event-exclusive Utsusemi for 800 Jala each. Players can pick up eight Demon Slayer: Kimetsu no Yaiba-inspired IPPON Decorations for 500 Jala a pop, and the following seven emotes to really feel like a Demon Slayer Corp:

Players can also deck out in demon slaying style with 20 new Stickers, available for 400 Jala each. As a bonus, every player who logs in will get a free Demon Slayer: Logo Sticker. Plus, a free Nezuko IPPON Decoration can be found as a battle reward for Quick Battle, Ninjala Battle, Featured Battle, or Ninjala Tournament.

Comin’ through, comin’ through! We hope you’ve been training like crazy and mastered all of the Breathing Styles, because the Demon Slayer: Kimetsu no Yaiba Cup Ninjala Tournament is on its way! On August 28, players can fight like it’s Final Selection on Fujikasane Mountain for the chance to earn exclusive rewards. All players who join will receive a Demon Slayer: Total Concentration! Sticker for participating and a Tanjiro IPPON Gum skin as battle reward drops. Top players will win a special IPPON Decoration and a Gourd Burst Emote. Pull out your best breathing techniques to cut through the competition!

Ninjala is an online Ninja-Gum action game featuring a colorful cast of ninjas who battle it out in action-packed clashes while free-running across dynamic environments. These young descendants of ancient ninja clans wield a variety of special items and abilities, highlighted by the use of distinctive “Ninja-Gum” weapons. Check out the trailer here and assets here.

What's Demon Slayer: Kimetsu no Yaiba?
A TV anime series based on Koyoharu Gotoge's best-selling manga, serialized in SHUEISHA's JUMP COMICS with its 23 volumes selling a cumulative total of over 150 million printed copies in Japan (as of Apr. 2021).
First aired in Japan in Apr. 2019, the story begins with young Tanjiro Kamado joining the "Demon Slayer Corps" in search of a way to revert his demon-turned sister Nezuko—his only surviving family after their massacre by the hands of another demon—back into human form. Its heart wrenching tales of both people and demons alike, along with breathtaking displays of swordsmanship and occasional comedic scenes, garnered immense popularity worldwide.
Then on Oct. 16, 2020, the "Mugen Train Arc" movie adaptation was released in Japan as a direct sequel to the TV anime. Furthermore, a new season of the TV anime is currently scheduled to air in 2021.
©Koyoharu Gotoge / SHUEISHA, Aniplex, ufotable