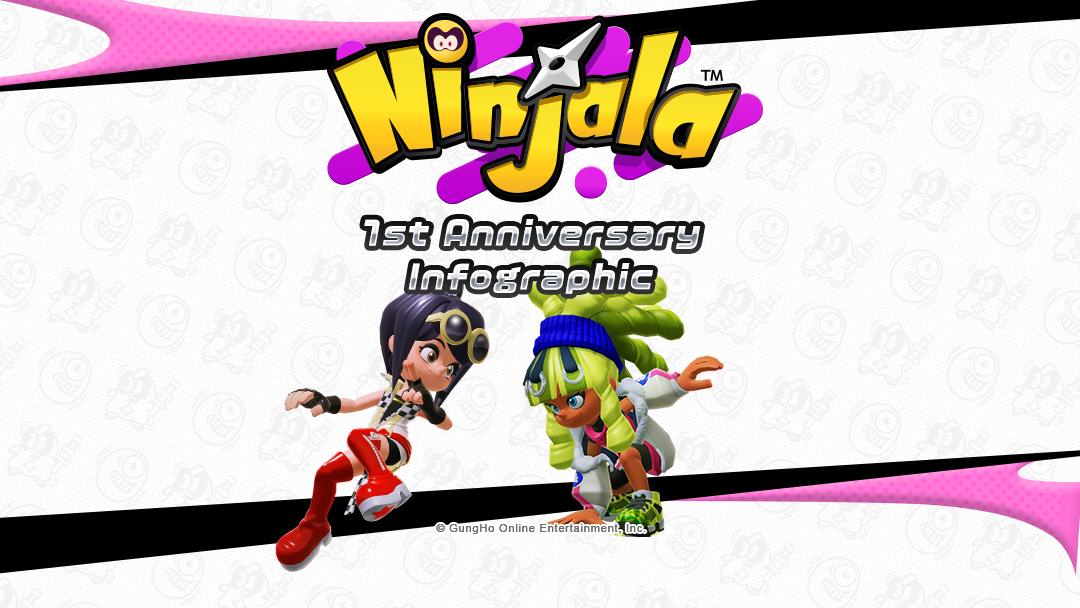 Ninjala celebrates its first anniversary with plenty of in-game goodies and dropping its biggest collaboration yet! While all of the new things are all good fun, we can’t help but also think back on what a crazy year this has been for Ninjala.

Since launching on June 24th, 2020, Ninjala has amassed over 7 Million downloads! How many IPPONs is that? Too many to count. But what we can tell you is on this infographic we put together just for the anniversary!

Would you believe us if we said the IPPON Katana is the most popular weapon in both Team Battle and Battle Royale? That’s a lot of Ninja Tornadoes causing a ruckus on the battlefield! Interestingly enough, ninjas prefer to use Iron Noise and SK8 Hammer in Team Battles while the Drill Beast and Matsuri Board are preferred in Battle Royale.

Now, while a ninja is only as good as their weapon of choice, no Ninjala player is truly complete without equipping some Shinobi Cards! Unsurprisingly (to a casual Ninjala player), Starting Dash is the most popular Shinobi Card in both Team Battle and Battle Royale, which is fitting as it’s a great starting Shinobi Card for anyone starting out in Ninjala! Quick Respawn is also used as one of the top 3 Shinobi Cards in both battle modes, but it’s a little more popular in Team Battle.

Have you ever wondered which cosmetics were the most popular in Ninjala AND how they looked together? This handy infographic also has that for you! Interestingly, simple and modern seems to be the theme for these popular items. Whether you like to imagine yourself or create an original character in Ninjala, you have plenty of options in dressing up your in-game Avatar to choose from, but it’s still interesting to see what a lot of other Ninjala players are wearing… even if you don’t see them while the battle is on!

This past year of Ninjala has been filled with fun and exciting events and collaborations. Don’t forget to check out all of the exciting things coming to Ninjala in celebration of the first anniversary in the latest dev diary here! We are grateful for all of our ninjas and hope this next year is even better! Is there something you would like to see in an infographic like this in the future? Let us know!

Edit: We made a mistake in the original infographic regarding the Mononoke mask. Please see the following images for the correct item!