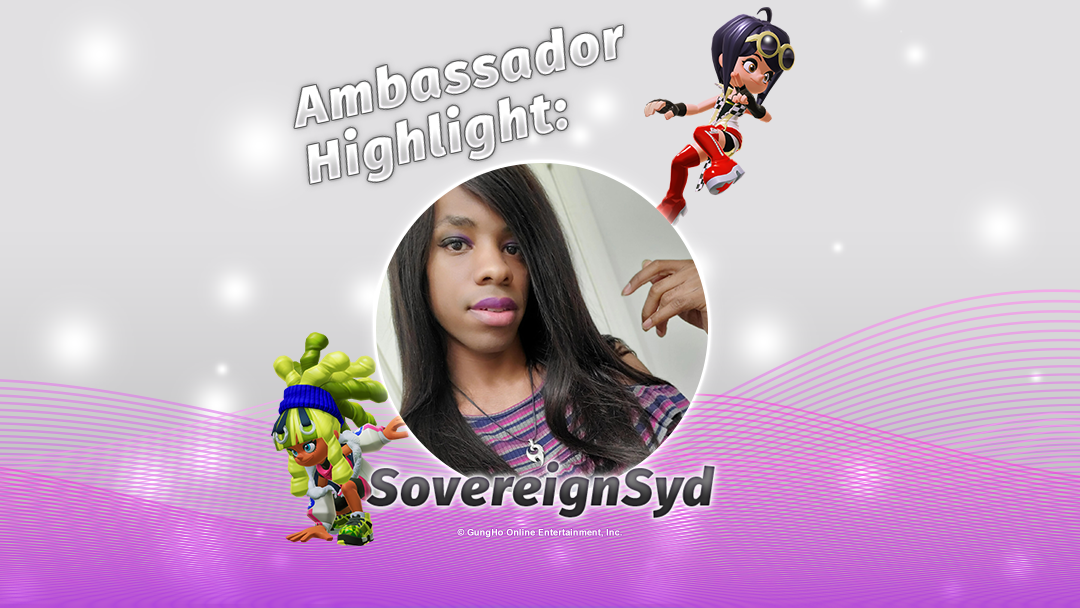 SovereignSyd, also known as Empress within the Ninjala community, is a variety Twitch streamer, focusing on Nintendo and PC games, as well as an avid cosplayer. She has shown us her love for Ninjala and the community, and will be one of our commentators for the upcoming Ninjala Tournament, Bubble Bobble Battle. Check out this feature about SovereignSyd and get to know her before the tournament!

How did you start your career as a streamer and what kind of streams do you do?
I created my channel about five years back, but I didn't really get back into streaming regularly until around two years ago. As a variety streamer, I play pretty much whatever comes to mind, so one really never knows what I'll be playing when they visit! Sometimes, during special events, I'll cosplay a character from the game I'm playing, as well; And, I try to utilize my voice acting to bring life to games without it!

What is your favorite GungHo game and why?
My favorite GungHo game is Ninjala! I'd actually missed its premiere announcement during… 2017, I think? It was through the announcement trailer in March of last year. I instantly fell in love and couldn't WAIT to get my hands on it. I ravenously pursued both Exclusive Ninja Club demos, which solidified my love for the game.

To me, Ninjala has become a bit of an instant classic. It hasn't even been out that long and the Base music gives me nostalgia! It's so fun to just pick up and play, the characters are charming, and it's just oozing style and personality.

Do you have any tips for someone who just started playing Ninjala?
For players just starting out in Ninjala, it's important to try different weapons to see which kind fits your playstyle best. Trying them all out also means you'll have a better understanding of how they work, so when you're up against that weapon, you'll know how to handle it! Some weapons are better than others at certain things, so it's handy to learn those roles as well.

How did you become a GungHo America Ambassador and what do you like the most about it?
That's actually a long story. Ninjala came out in June. Right then and there, I knew I'd want to showcase it to my community as best I could, and so I looked into how to do that. When I realized that Ninjala was developed by GungHo, I reached out to a friend who was already an Ambassador for TEPPEN about how to become one. He connected me to a GungHo representative who then pointed me to an application, which I filled out. This happened in July, way back before Ninjala's Ambassador Program had even been announced! That's how long I knew what I wanted to do.

My favorite thing about being an Ambassador is that I can be a bridge between the Ninjala community and the community managers and representatives. I can be an ear to the ground regarding player concerns, and make sure that their voices can be heard.

How do you feel about commentating for the first North American Ninjala Tournament next week?
I'm abundantly elated and so very grateful to have the opportunity to commentate for the very first official tournament here, it's such an honor. Commentating is something I already love to do, in fact, I actually used to do it for my job! And now, to be able to bring that to this game that I love brings me joy beyond measure. Thanks so much for having me, and I can't wait to join the others on the mic!

Do you have any goals as a streamer and GungHo America Ambassador?
My goal as a streamer is to foster a community where people can have fun and be open and comfortable. My channel is also LGBTQIA+ friendly, as I'm a part of that community as well (the B, in particular); I want to create a space where people feel safe to be themselves, no matter who they are or where they come from.

My goal as an Ambassador is the same as it is for my own community: To create and grow an open and fun environment. Ninjala is a game full of passionate people and steadfast players, both casual and competitive. As both a participant in community-driven tournaments, and just someone who plays on their downtime, I want to shine a light on both ways to play!

What are your motivations for streaming?
When I first started streaming, it was ephemeral, whimsical. But now, what really motivates me is seeing everyone who comes to visit and hang out. I'm already an Affiliate for Twitch, so while becoming a Partner would be nice, it isn't the main reason I stream. It's for the people, it's to make friends!

Any advice for someone who wants to start streaming?
The biggest piece of advice I can give is to just take the plunge! It can seem scary jumping onto a platform that already seems oversaturated with content and seems like it already has everything, but it's missing one thing: You! You don't need the most expensive setup or the fanciest elements. Your audience will find you, and your community will grow. Just create what makes you happy, and you're already a top contender!

Anything else you'd like to mention to the readers?
I suppose as a fun fact, the only reason my handle in Ninjala is "Empress" is because when I added the tag of my clan, +1, to my username, "Sovereign" was too long to make it work. I spent a long time thinking about what I wanted to change it to that still kept that magnanimous, opulent feeling.

But, it feels weird not being known ubiquitously as Sovereign anymore, I must admit. Still, the name Empress has grown on me so much, I've actually considered rebranding! If Nintendo ever extends the character limit on player names, or if Ninjala's new Clan system makes my tag redundant, I'll probably change back to Sovereign, though.