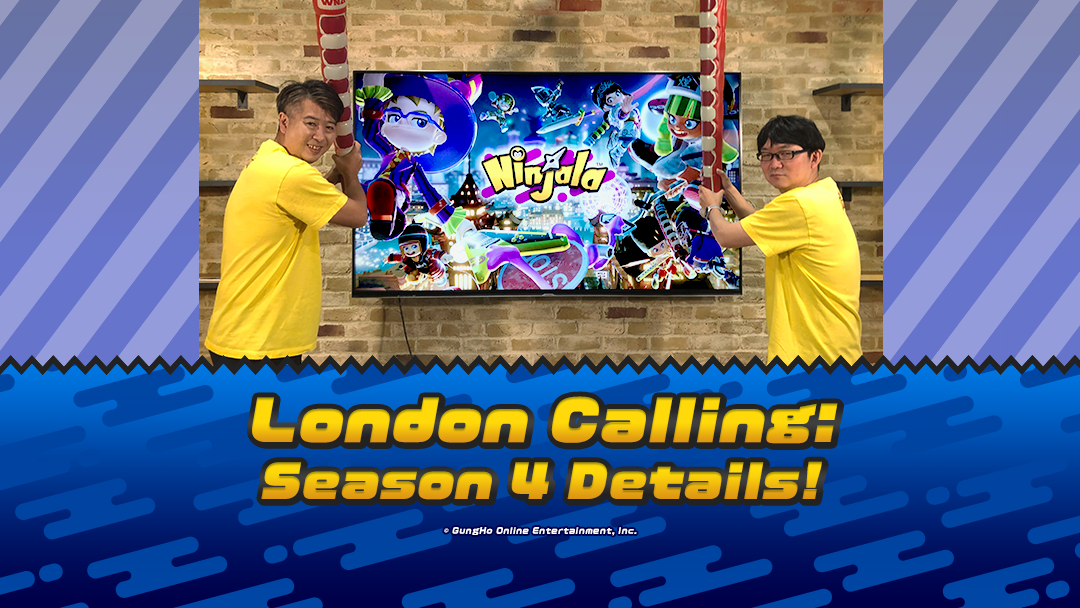 Morishita-san and Kaneda-san are back with more news about what players can expect from the upcoming fourth season of Ninjala, and this time we’re going across the pond for some bubble-bursting adventures! Beginning on 01/07 and running through 03/24, Season 4 of Ninjala will introduce a new stage with a London theme that’s sure to have players all pip pip and cheerio. “Fort Riverdale” is a large, vertical map based around a giant clock tower and gum factory. What’s more, this map will be the first to offer some nighttime views with its starry skies and classic London gas lamps.

Make sure you take advantage of “Fort Riverdale’s” special features like the Warp Gate, which can teleport you around the stage instantly, and the Giant Gum Gacha, which dispenses massive gum balls that all have varying effects on you or the match. Will you be able to power up with all the options at once? You’ll have to find out in January!

Season 4 will also introduce two new Katana-class weapons, the “Scrap Saber” and “Chewing V”. Likewise, we’ll also have new Ninjutsu, like “Shinobi Disco”, and specials, like “Froggy Block”, to expand your WNA skillsets even further. With “Shinobi Disco” you can create a dancing field to distract opponents, and make them boogie to the beatdown you’re about to give them. “Froggy Block” might come in handy too, as it can throw up a sizeable wall to protect you and your teammates from incoming attacks.

New Shinobi Cards “Energy Hoarder”, which increases the amount of S-Energy recovered when collecting it on the map, and “Quick Respawn”, which allows you to respawn immediately where you were defeated with low health up to three times, should also help you push harder in obtaining that elusive Ninja God rank at the end of the season.

We’d be remiss in not talking about the incredible new collaboration coming to Ninjala on 12/07, Puzzle & Dragons. That’s right, we’re teaming up with another of our favorite games from our library to bring you some exciting new items based on the massively popular mobile game.

From 12/07 through 01/06, you’ll be able to find new cosmetic items based on PAD characters like "Red Dragon Caller, Sonia", "Valkyrie", and "Hattori Hanzo". We’ll also have a unique Toragon-themed mask and a REMDra Utsusemi for purchase, too. New BGM music based on familiar Puzzle & Dragons tunes will be included, and there’s also going to be an IPPON decoration anyone can obtain just by playing matches.

As part of the celebration of this collaboration, we’ll also have a special sale on Puzzle & Dragons GOLD on the Nintendo Switch. From 12/10 through 12/27, you’ll be able to get the game at 66% off! We’ll also be hosting a North American Ninjala stream on 12/07 to celebrate the arrival of PAD in Ninjala. Keep an eye out for official details soon!

The developer diary also features a tiny tease for the next 2D Cartoon Anime, featuring Emma. Learn what her episode will be all about, and get ready to enjoy the full episode very soon! There’s also a special announcement about new Ninjala merchandise we’re working on with partners at Bandai. Trust us, you are going to want to get your hands on these sweet new collectible cards.

We’ll have more details on what to expect and when to expect it on our social media channels, so make sure you’re following PlayNinjala on Twitter, Facebook, and Instagram to stay in the know!

Until next time, Ninjala!