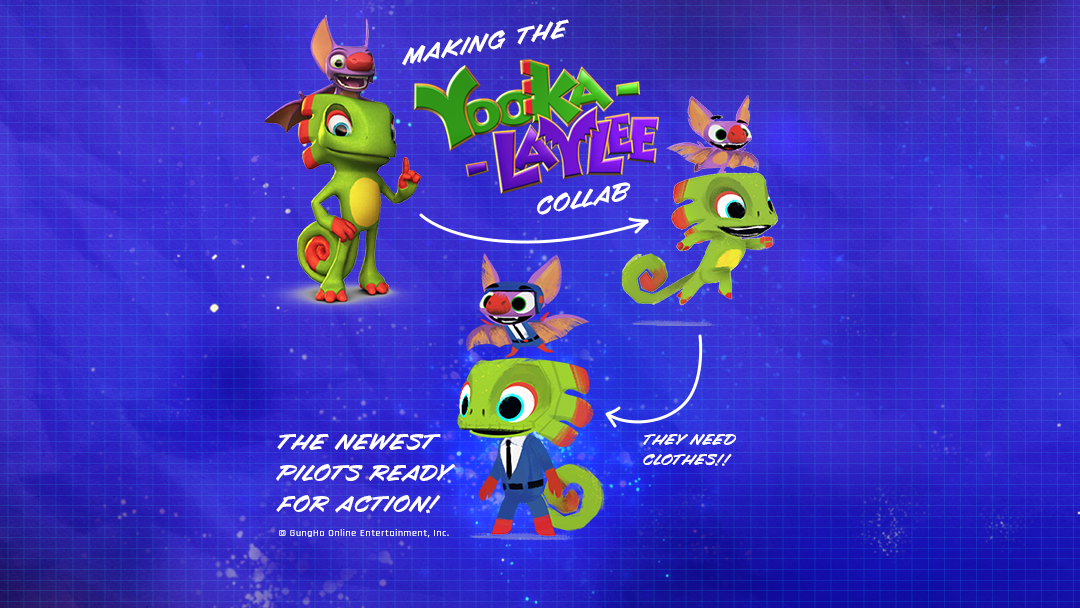 Volta-X Yooka-Laylee: Inside the Collab

This week we’re excited to bring the wonderful characters of Playtonic Games’ Yooka-Laylee series to Volta-X. Already beloved by fans around the world for their acrobatic adventures, Yooka and Laylee were at the top of the list of potential collaborations for Volta-X not just because of their animal nature, but also because their charismatic charm and unique personalities made interesting additions to our game world.

We’re excited for everyone to experience playing with Yooka and Laylee with our latest update, but also wanted to provide some behind-the-scenes information about how the development team at GungHo America worked to bring this adventurous pairing to life in such a wildly different game. Though everyone at home will get to see Yooka and Laylee in their final forms, a lot of effort went into bringing these characters to life in Volta-X in a way that stayed true to our game while honoring Playtonic’s creations.

“The main challenge for us as a team was wanting to do all we could to do right by the characters,” explained Volta-X Producer Sydney Olmon. “We were so happy to have the opportunity to work with Yooka and Laylee and wanted not only Playtonic, but the existing fans of Yooka-Laylee to feel like the characters felt true to themselves.”

That starts in the visual design, where Volta-X Art Director Pramin Phatiphong worked to transport Yooka and Laylee from their fantastical home in Shipwreck Creek to the high-stakes arenas of the World Volta Association. “I realized that their world had a sunnier disposition in contrast to Volta-X’s, which had an undertone of grit in the adrenalized smile or grin,” he said. “When I applied that kind of energy to Yooka and Laylee, I felt like I kinda broke its distinctive but subtle charm.”

Adapting someone else’s characters felt as if he was an artist painting a portrait of another family’s children, Phatiphong explained. He hoped to faithfully and accurately capture their spirit, being careful to keep the playfulness of Yooka and Laylee intact despite the challenges it presented. “The real challenge was trying to find a subtle compromise in adapting and preserving their organic shape and design to Volta’s angular design motifs without losing its recognition,” he said.

That process involved tiny iterations from concept through the final design, with Phatiphong opting to continually shape the characters like clay versus iterating on new and different designs. Simply shifting and adjusting the various elements in the vector art, like the curl of a smile or proportions of limbs, allowed for nimble revision that quickly resulted in a design both GungHo and Playtonic approved enthusiastically. While a different version of the characters could have seen them appear sans the iconic Volta pilot uniform, adding that extra touch cemented the illusion that Yooka and Laylee had been here all along.

“The worlds and tone of Yooka-Laylee and Volta-X are very different from each other, so we needed to balance making Yooka and Laylee fit in the Volta-X world while also working to keep the personalities and look of Yooka and Laylee consistent with who they are in their games,” Olmon added. “We also wanted to bring up some elements that only exist in their world to try and bridge the two games and make Yooka and Laylee’s presence believable.”

That extended to the gameplay aspects of this collaboration, too. Traditionally, when coming up with abilities for Volta-X, the team always wanted to ensure gameplay would be dynamic, and that the importance of crew choice was more focused on your Volta build versus a handful of pilots that were good for every situation. This was even more of a difficult proposition when coming up with the special ability for our guest-stars. Would the two interact separately or in unison? Would the ability come from the Yooka-Laylee titles, or be something original to Volta-X?

“The approach of making a new Volta-X crew ability had a drastically different process than in making Yooka-Laylee abilities,” said Volta-X Senior Software Engineer, Thomas Lu. “All Volta-X abilities generally are created with some drawback in mind, as well as being able to balance the ability through numbers. The Yooka-Laylee special was different since we had to stick closer to the original source material, making balance potentially harder.”

Like our existing roster of brave pilots, Yooka and Laylee’s unique skill had to set them apart, add more depth to crew composition strategy, and faithfully work to meld the original games with our own. The process of incorporating some of the more dynamic abilities Yooka and Laylee have in their own games was challenging, but our development team was more than up for the task.

Before arriving at “Slurp State”, an ability that allows Yooka to absorb any elemental attack and then apply that same effect onto a weapon of his own, the team worked through several different concepts based on Playtonic’s games. “Sonar Shot”, where every empowered ability from Yooka had the capability to stun opposing crew, and “Sonar 'Splosion”, wherein an empowered shot from Yooka would cause crew to run to other rooms if it connects, both had a connection to the original Yooka-Laylee games, but didn’t quite match up as strongly as “Slurp State” within Volta-X’s gameplay.

A few other ideas based more closely on Volta-X’s world were also considered. “Double-Team”, which had Laylee fly to another room and empower the Volta’s weapon if the room is connected to the one occupied by Yooka, didn’t quite cut it. Neither did “Teamwork Tactics”, where every attack empowered by Yooka followed up with another hit that dealt 1/4 the damage of the original attack. Both were strong ideas, but again, didn’t quite meld the divergent worlds of Volta-X or Yooka-Laylee as much as “Slurp State”.

That said, “Slurp State” didn’t have an easy path to victory either. It took some clever ingenuity from the team to make “Slurp State” as valuable as existing abilities like “Quick Learner”, which included adding in a new weapon for players too.

“In early testing, we found that ‘Slurp State’ was effectively useless if the opponent did not equip any status-causing weapons,” Lu explained. “We remedied this by adding a new weapon, the Dai Beam Cannon, which explodes and sets fires to rooms after too much usage. This was meant specifically to complement Yooka’s ability, but at a high cost. We found this balancing act of managing intentional fires while being able to deal massive damage to the opponent to be an interesting battle mechanic, and at the core was pretty fun to use.”

While testing all the different loadout possibilities, the developers also found some strong early strategies for having Yooka and Laylee in the crew, like partnering the new Dai Beam Cannon with the recently added Shotgun. Having a room on fire that Yooka could “Slurp State” and then impart onto a Shotgun blast that hit all rooms could cause massive havoc for your opponent. Just be careful they don’t have a Yooka-Laylee crew loadout as well, otherwise you’re looking at getting that fire blasted right back at you.

“Yooka and Laylee are really fun characters with a great dynamic, so it was fun to create a side story around them,” Olmon concluded. “Playtonic was very open to everything that we brought up, their feedback was very actionable, and it was a pleasure to work with them.”

While we’ll let you enjoy the all-new story missions introducing Yooka and Laylee to Volta-X, and then diving into your own strategies, we hope you enjoyed this glimpse into the process. Don’t forget, Volta-X is available now on Nintendo Switch and Steam for $19.99, and the update featuring our Yooka-Laylee collaboration will be available free to all players beginning today!