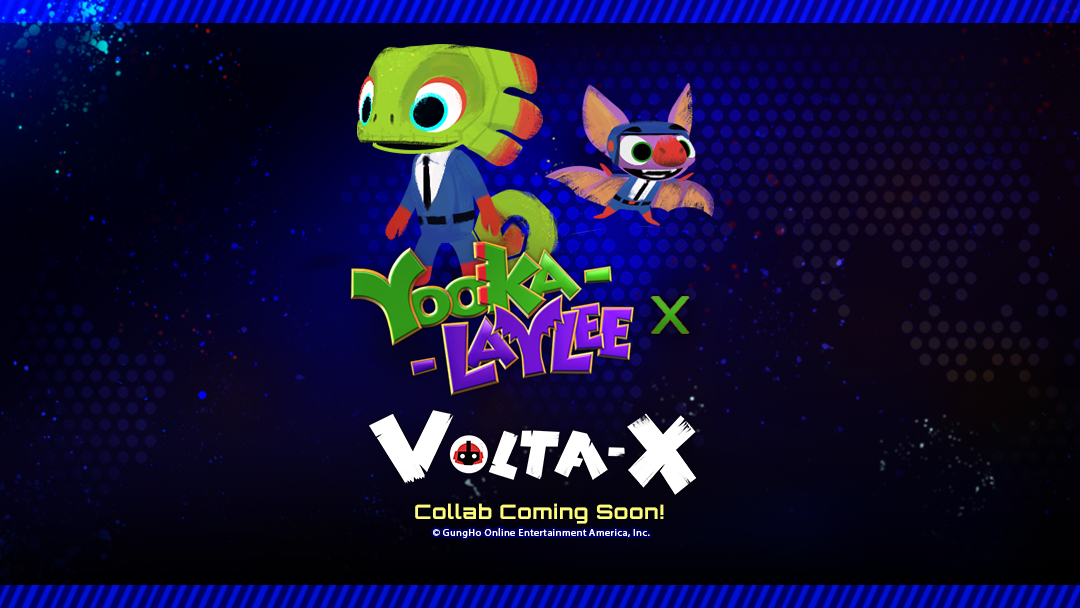 EL SEGUNDO, Calif. – October 29, 2020 - What’s all the buzz (and beep-boops) about? GungHo Online Entertainment America (GOEA) today announced that a crossover collaboration with Playtonic Games’ Yooka-Laylee is on its way to Volta-X this November. Additionally, in the strategic robot battler’s first major free content update, players today will see changes to the game’s Headquarters and combat balancing, as well as new weapons, and Emotes.

Yooka and Laylee are gearing up for a fight — and they mean bees-ness! Yooka will turn a new page on this tail — errr tale — by joining the Volta Crew in an original story mission, complete with his own unique abilities. “Slurp State” allows Yooka to take on any environmental effects in a room and imbue his next attacks with that effect. More details on the collaboration are coming soon.

As for the new update dropping today, the Headquarters hub is receiving an Edit Mode, which will allow players to move parts of their Base around. Improvements have also been made to Crew Assignments and selection. Players will receive new battle Emotes and a Volta taunt, and can now access multiple save slots if they want to battle their way through the game’s story again.

Four new weapons are being thrown into the mix to change up the game:

Starting on Halloween day, players will be able to compete in a series of special tournaments to win spooky new Kaiju and Volta themed Costumes for their Crew. Just hope that your bot doesn’t go sci-fi on you with a mind of its own! In addition to the special Halloween events, Volta-X will be 50 percent off on Nintendo Switch and Steam, from Oct. 29 to Nov. 2.

Volta-X is a real-time strategy RPG, where players control a crew of animal pilots working together within a giant Volta robot, battling other Voltas and monstrous Kaiju in both PvE and PvP fights. Players can customize their Voltas with thousands of combinations - creating a custom loadout to suit their playstyle that can implement multiple weapons including heat sabers, massive drills, acid launchers, and more. Strategy in battle is key as players manage firing off weapons and commanding their team of Volta pilots to power-up weapons, repair their Volta, or extinguish fires. But in between battles, the crew needs time to relax and prepare for the next fight - they’ll relax at their fully customizable headquarters that can be decked out with a barrack, machine shop, garden, music room, and even a cinema - ensuring they remain happy, healthy, and ready for battle! As players progress through the game, they'll learn more about their crew members and the world they live in uncovering hidden secrets that may forever change their world…

Review codes for Volta-X for Nintendo Switch and Steam are available upon request. Please email gungho@triplepointpr.com for codes.

Get ready to bust some IPPONs!

Win big while lounging around the hottest "vacation" spot of the season!