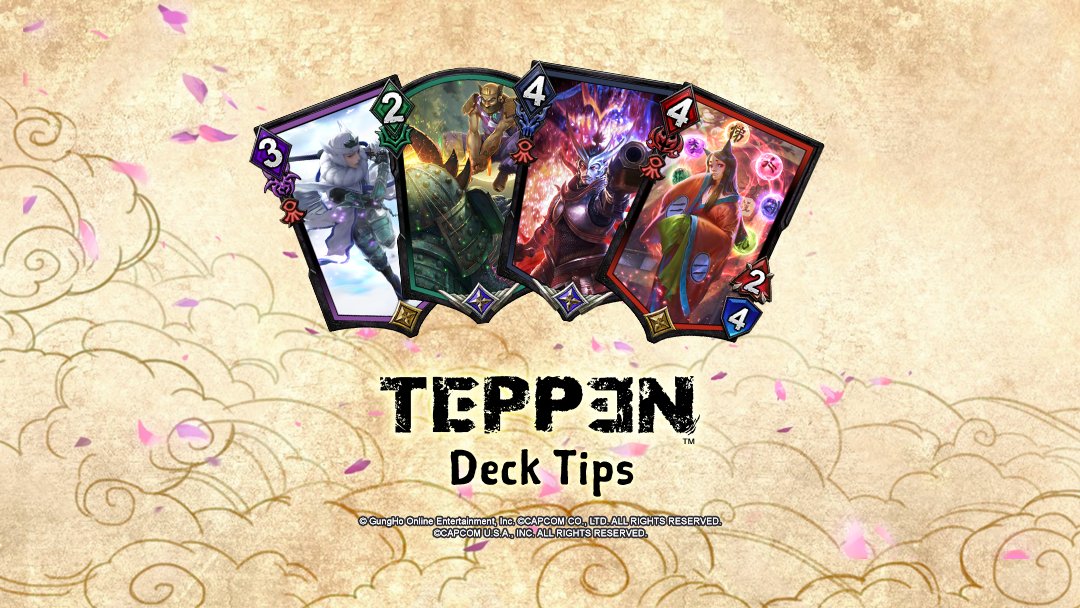 Now that TEPPEN is over a year old and has released seven different expansions, there are a lot of cards to consider when building a deck. Our most recent release, “The Tale of Amatsu no Kuni”, added more than 100 new cards to the mix, bringing new mechanics like Crush, and boosting some of the older mechanics like Growth and Ascension, too. Whether you’re a new player or someone who’s been with us since the start, those new cards can be a bit overwhelming to parse when an expansion first drops. Fortunately, our community and our GungHo Ambassadors are incredibly smart, and capable of doing most of the heavy lifting when it comes to testing out new cards in decks.

Just one week after “TOA” arrived, we’ve already got a number of incredibly fun, strong, and creative new decks that make use of plenty of the new cards, our newest Hero, Amaterasu, and suit a variety of playstyles and Elements that have come to define TEPPEN’s meta. No matter how you like to play, or which Heroes you like to play with, the following videos should give you a great idea of where to start, how to play these decks, and provide a solid foundation for you to take them to the next level when playing Ranked during the current season. We’ll provide a bit of context to the decks, but watching these videos and hearing from the creators themselves will give you the best understanding of how they work and help you decide if they’re a fit for you.

Plus, with the Online Region Cup coming up in a few weeks, these decks will definitely come in handy if you’re hoping to take your shot at qualifying for the TEPPEN World Championship 2020. Let’s jump into the decks then so you can start building and practicing now!

First up we have this cleverly named deck featuring TEPPEN’s new Hero, Amaterasu, from Okami. The deck makes use of new Growth cards added in “TOA” featuring some very good doggos like Hayabusa, Ume, and Sun Goddess Amaterasu, as well as relying on some of the most powerful and widely used Growth cards from previous expansions, Chill Penguin, Crimson Battle-King Ken, and Rashid. The ability of these cards to get more powerful with Growth, earned by playing other cards, is key, as is the low-cost Growth each of these cards requires.

With a lot of instant damage-dealing effects from Growth, this low-ramp deck is quick on the attack, and can often deal damage across all the opposing Units before an opponent has a chance to respond. There are only eight total Action cards in this build, but both Grizzled Veteran Agent, which deals damage equal to the number of times Growth has triggered, and Friendly Feud, which gives three Growth points and +2 Attack (for one attack) to any Unit with Growth, are instrumental in providing this deck with the flexibility to respond during the action phase with plenty of damage.

Those damage-dealing effects are clutch in whittling down the enemy Units to three or less health, so you can then trigger Great Divine Intervention to not only eliminate them from the game entirely, but also buff your own Units with an extra two health, keeping them active and attacking for longer.

A more challenging deck simply due to the dual-color nature, RyanFMTG’s Thunder Wolf is a very aggressive deck that can turn the tide of a match quickly, though piloting to success will take a bit of skill. The deck’s strengths come in the form of Flight and Agility, with one of TEPPEN’s strongest cards, Valstrax. This is a foundational Unit for this deck, ripe for buffing with Action cards like True Faith, Beast Cannon, and Research Subject, all of which boost the Attack strength.

Adding in Combo Units like Seregios and Heavenly Kicks Chun-Li continues to push the action in your favor, and while these Units are low in damage-dealing ability when first played, using some of those Action buffs here, along with activating Thunder Edge (+1 Attack and Agility to a single friendly Unit) on Seregios, makes for a very threatening Unit that must be dealt with quickly by your opponent. Having a few Seregios and a Valstrax/Chun-Li on the field at the same time really pressures the other player into quick reactions that might not let them set up their own strategy.

If you can get to the point where you have multiple Agility Units on the field, and can transform Forlorn Protector Lucia into Demon Form Lucia (who deals three spread damage to all enemy Units while attacking), there’s a good chance you’re going to be able to walk away with a win in a short amount of time.

The release of “The Tale of Amatsu no Kuni” added in a lot of Growth support for Purple, something the color had been somewhat lacking the past few expansions. Now, however, there are plenty of Units to make a mono Purple Growth deck not only viable, but a very dangerous deck to play against. Purple is a traditionally Action-heavy deck, but in this build, Vintendo shows what’s possible when going with a more Unit-heavy focus.

That said, Actions like Uncanny Chill and One-Eyed Dragon’s Value, bring plenty of… value to this deck primarily because of the Growth synergies. Uncanny Chill boosts a Unit’s health by three and gives it three Growth points, which can often be enough to activate a new stage in a Unit’s Growth. One-Eyed Dragon’s Value only gives Unit’s with Growth the Crush ability for one attack, but that attack is instant, and with Crush, won’t see any damage dealt back to your Unit. As Vintendo points out in his video, it’s a simple way to instantly respond during an Action phase, turning the tide ever so slightly in your favor.

Where this deck really shines is in the way Units like Uesegi Kenshin, which gives all other friendly Units +1 Attack and inflicts Halt on a random enemy after dealing damage to the opposing Hero, and Katakura Kojiro, which gives a Shield to a random friendly 5MP+ Unit with Growth, complement the strong Growth Units like Dante, Innocent Desire Lilith, Oshu Lord Date Masamune, and Kuroda Kanbei. Finding ways to have all the cards harmonize like this isn’t always easy, but once you start to understand how each Unit interacts with the others, it’s easy to see how and why this deck can be so formidable.

Black decks have never not been incredibly powerful in TEPPEN, and they continually get great support with each and every expansion. “The Tale of Amatsu no Kuni” was no exception, bringing the incredibly powerful Serpent Demon Orochi into the fold. The Okami villain comes with a hefty 8MP cost, but is bolstered by equal attack and health to start. All damage this Unit takes is reduced to just one, and it loses one attack every time it takes damage. However, rather than Attacking opposing Units head-on, each time Orochi attacks, it deals damage equal to its Attack as spread damage among all enemy Units and the opposing Hero. As you might imagine, buffing this Unit with Actions like Psycho Power, Forbidden Fruit, or even Boltreaver’s Valor, can turn Serpent Demon Orochi into a game-ending threat in no time.

That same thought process can be extended to the handful of other Units in this deck like Tyrant (T-103), which transforms into Super Tyrant when destroyed, or even Civilization Rebel Sigma, who has infinite Revenge, and all the benefits that entails. Even if all those Units take an absurd amount of damage and are thrown to the Graveyard, casting Living Death as an Action can refill your board with threats that opponents often cannot answer.

Have we mentioned yet that Akuma’s Ashura Senku Hero Art grants any Unit it’s cast on Veil and immunity to damage for 10 seconds? Yeah, so just imagine a beefy Super Tyrant or Orochi afflicted with Bloodbath Frenzy and any other buffs flying around the board without much chance of being hurt for 10 seconds. This deck can ruin an opponent’s night relatively quickly if you get the right cards in hand, and as long as you grasp the fundamentals Iowa shows off in his video. It is not for the faint of heart, as it can lose just as quickly as it can win, but it is nonetheless a fascinating deck to play, and one that shows just what’s possible with the right combination of cards from across TEPPEN’s library.

Be sure to check out, subscribe, and follow our spotlighted Ambassadors for even more great TEPPEN content. We’ll be sharing more of their insights right here on this very site in the future, and hope you can continue to learn and grow alongside our best players.