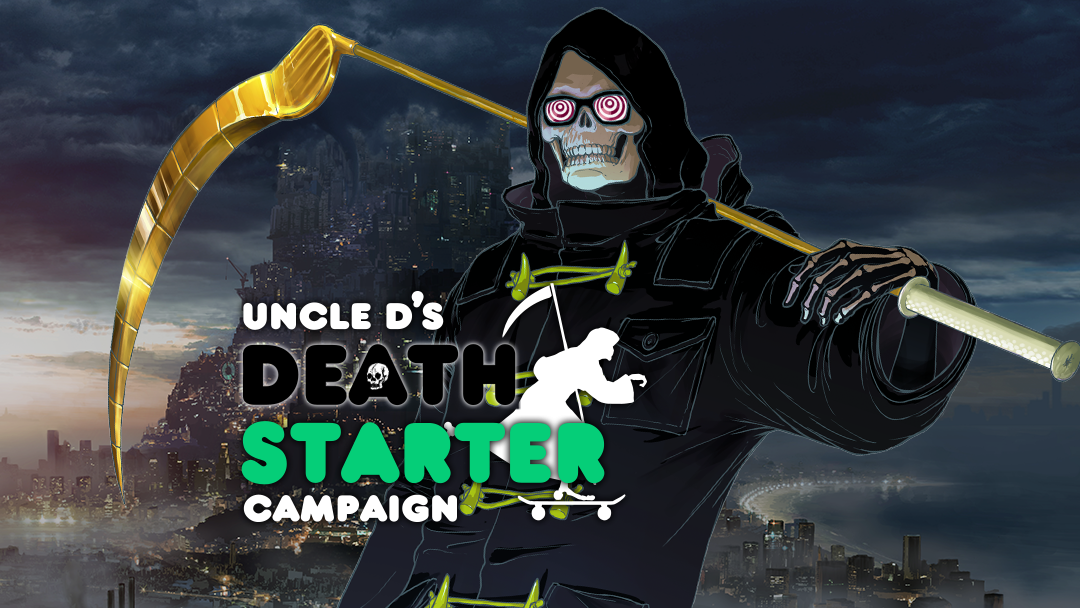 Uncle D’s Deathstarter Campaign is here! But what exactly IS a “Deathstarter”, anyway? Why, it’s Uncle Death’s way of thanking his senpais for nearly four years of love and support, of course! With free gifts, special login bonuses, three free continues per day, and an opportunity to add some of the most requested features to LET IT DIE, it’s a celebration you won’t want to miss.

The Deathstarter Campaign is currently live and will run until October 26, 2020 (PDT). The cornerstone of this event is the free “Uncle Death Super Pack” DLC, available now for download from both Steam and the PlayStation Store. This free limited-time-only DLC pack comes with blueprints for the “Grim Reaper’s Scythe R1” weapon and the “Ultra 3D Glasses W1” armor, as well as a single Death Metal, LET IT DIE’s premium currency.

In an unprecedented move, Uncle Death has agreed to permanently add additional content to the game depending on the total number of times the “Uncle Death Super Pack” is downloaded! Possible additions to LET IT DIE include new weapons and armor, a new Skill Decal, upgraded benefits for Express Pass holders, and even a special elevator that will take endgame players directly to the 100th floor of the Tower of Barbs. For a full list of possible rewards, see the image below.

LET IT DIE players will also be able to experience some additional benefits during the event. Daily login bonuses have been supercharged, and players of all levels will receive several much-needed R&D materials each day just for logging in! In addition to that, all new players who register a free LET IT DIE account during the event will receive a bevy of rewards including 20 Death Metals, five 1-Day Express Passes, a blueprint for the powerful Masamune TDM katana, a selection of some of the game’s most popular Skill Decals, and more!

Finally, there’s no need to worry if you accidentally kill yourself (or get stabbed, bludgeoned, sliced in half, etc.) while climbing the Tower of Barbs. During the Deathstarter Campaign, all players will be able to take advantage of three free continues per day to keep on climbing!

With all of the bonuses and rewards available to players during the Deathstarter Campaign, now is a great time to enter the Tower of Barbs and make your Uncle Death proud! Additional details about the campaign -- including info about the free “Uncle Death Super Pack” DLC as well as a schedule of the daily login bonuses -- can be found on the official LET IT DIE website, and be sure to follow Uncle Death’s social channels for more updates.