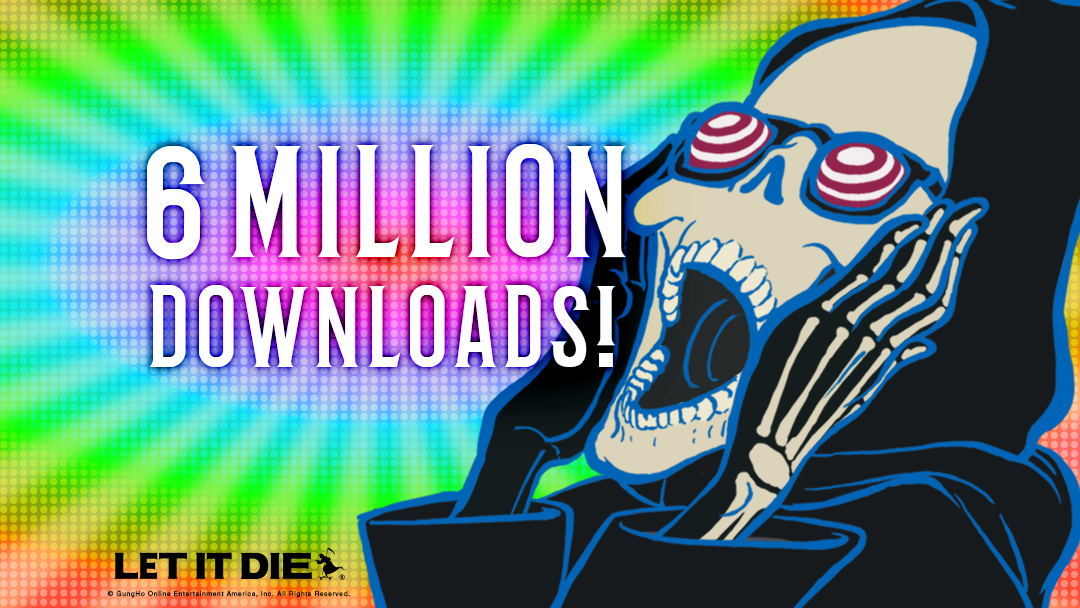 EL SEGUNDO, Calif. - Mar. 2, 2020 - It is a good day to die! GungHo Online Entertainment (GOE) and Grasshopper Manufacture’s hack-and-slash roguelike, LET IT DIE has surpassed over six million downloads worldwide. The milestone comes after its exclusive debut on the PlayStation 4 in December 2016, later launching on Steam in September of 2018.

“We owe it entirely to our dedicated fanbase, our ‘senpais’, for getting behind LET IT DIE and making this milestone possible,” says Kazuki Morishita, President & CEO of GOE. “The journey with them has been a pleasure as we have watched the game grow - just imagine the sheer amount of Death Data out there!”

To celebrate the momentous occasion, there will be an in-game event to be announced at a later date.

LET IT DIE is available on the PlayStation Store and Steam.

ABOUT LET IT DIE
From Grasshopper Manufacture and GungHo Online Entertainment comes LET IT DIE! Die to survive in this free-to-play hack and slash survival action game. Set in a post-apocalyptic Japan, players start with little more than their undergarments and must forage for powerful weapons and armor to do battle with the over-the-top ultraviolent future that waits. LET IT DIE has been downloaded over five million times.

ABOUT GRASSHOPPER MANUFACTURE
Grasshopper Manufacture with GungHo Online Entertainment Inc is a video game development studio based in Chiyoda-ku, Tokyo. Grasshopper Manufacture was founded in 1998 by CEO Goichi Suda (SUDA51), who is known around the world for his distinctive style and innovative work as a game designer and scenario writer. Popular titles include Lollipop Chainsaw and No More Heroes.