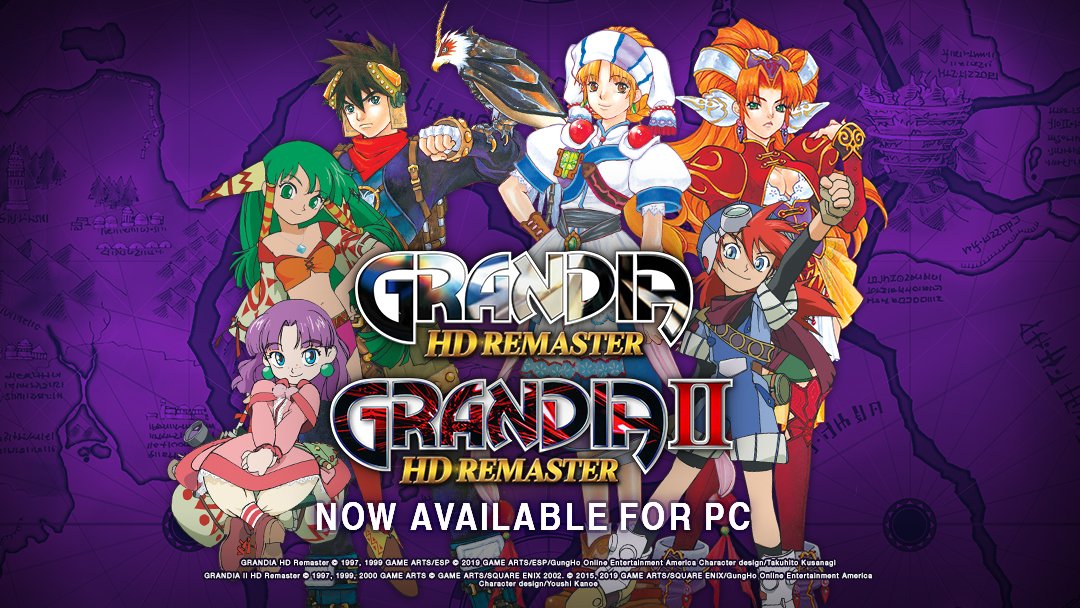 Find more about GRANDIA HD Remaster and GRANDIA II HD Remaster on its official website. For information on GungHo Online Entertainment America, visit www.gunghoonline.com, or visit GungHo on Twitter or Facebook. Assets can be found here.

ABOUT GRANDIA
Originally designed and created by developer Game Arts, creators of such classics as the Lunar and GRANDIA series, GRANDIA was met with wide critical acclaim when released for the SEGA Saturn in 1997 and PlayStation® in 1999. GRANDIA received numerous awards including GameSpot Editor’s Choice, IGN Editor’s Choice Award and an Award for Excellence from CESA AWARDS ’97, currently known as “Japan Game Awards”. Telling the story of protagonist Justin and his companions in a race against the evil Garlyle Forces to uncover the long-lost secrets of an ancient civilization. GRANDIA became an instant classic and is now considered one of the most influential RPGs of all time. GRANDIA HD Collection is available now on Nintendo SwitchTM and GRANDIA HD Remaster is available now on Steam.

ABOUT GRANDIA II
Developed by Game Arts, GRANDIA II is considered a highpoint for its unique battle system and stunning visuals. The story stars the mercenary Ryudo, who has been charged with protecting songstress Elena. However, soon after the two begin traveling together, everything they know about the world unravels, sending them on a mysterious and epic journey. Originally released for the Dreamcast in 2000 and PlayStation®2 in 2002, the game was critically acclaimed, receiving numerous awards including IGN Editor’s Choice award, and EGM’s Gold award. An HD remaster of the title, GRANDIA II Anniversary Edition, was released on Steam on August 24, 2015. GRANDIA II HD Remaster is available now on Steam.