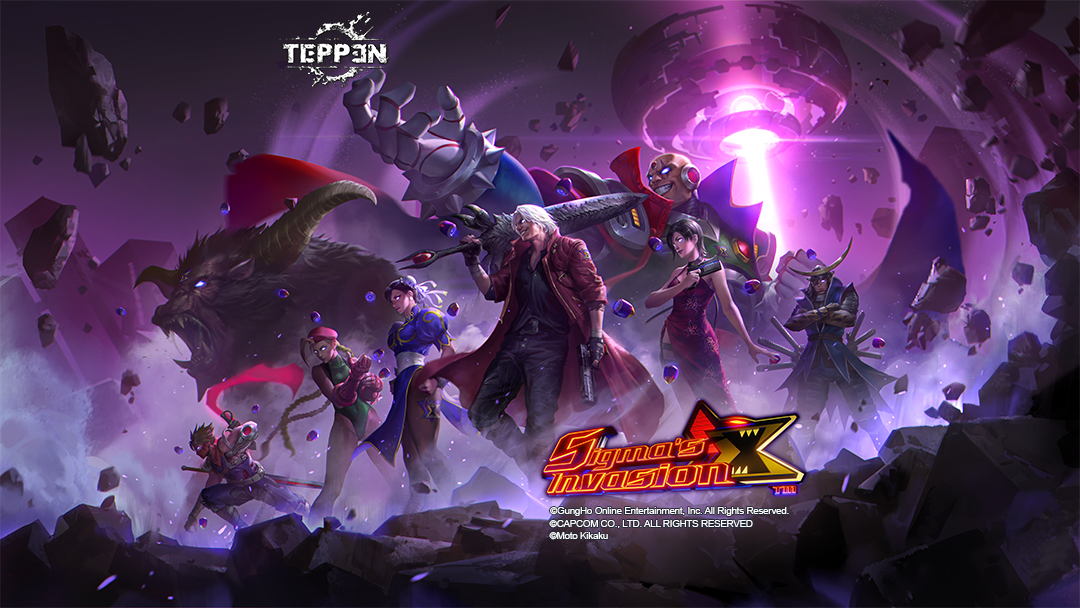 TOKYO, Japan – January 5, 2023 – The Reploid Army may have been defeated, but their menacing leader poses a new threat as the “Sigma’s Invasion” expansion launches in TEPPEN today. The final chapter of the “Echoes of the Lost Civilization” trilogy brings new characters from the arcade rhythm series crossbeats REV. SUNRISE and super-powered, robotic clones of beloved heroes from the Monster Hunter series, Street Fighter series, Mega Man X series, and more.

You can watch the full trailer for “Sigma’s Invasion” here.

Heroes Are Seeing Double
After the Anti-Machine Special Forces (ASMF) destroys the last fighters of the Reploid Army, the true invasion begins. The mastermind Sigma from the Mega Man X series moves to the final stages of his plan to exterminate all of mankind. Using Akatsuki from crossbeats REV. SUNRISE, the highest CPU that controls the Reploid Army, Sigma creates dangerous replicants based on battle data from ASMF heroes. These Mirage Soldiers attack civilians and heroes alike, forcing the ASMF to infiltrate Sigma’s Mirage Colosseum Fortress. Will they be able to defeat the Reploid Mastermind, or will mankind fall to the super-civilization?

New Cards
It’s hard to tell who is friend or foe, so build your deck with care! The Black card “Masterwork MS Zangief,” the Purple card “Mother Computer Akatsuki,” the Red Card “Sonic Vanguard Guile,” and the Green Card “Rainbow Bomber R. Mika” have joined the battle, but can you spot the Mirage Soldiers among the real heroes? Here’s a look at Mother Computer Akatsuki:

The Dark Slayer Emerges
Players will have a chance to find a rare Extra Skin based on Vergil from the Devil May Cry series by purchasing Special Packs. This Extra Skin for “Zero” is set for a mid-January release, so keep your eyes peeled!

3.5 Years of TEPPEN
TEPPEN celebrates 3.5 years with a special Anniversary Sale. Players can pick up a free season pass from the Soul Shop from January 5 to February 21. Characters will also get three Secret Spheres and ten card packs just for logging on between January 5 and February 28. Additional cards Secret “Sanada Yukimura”, Secret “The Princess”, and Secret “Hsien-Ko” will be given out as login bonuses throughout the anniversary celebrations.

Sigma’s Popularity Thanksgiving Event
To honor Sigma winning the TEPPEN Popularity Poll: Legendary, a special event will be held to honor the villainous mastermind. Players that complete the ranked Sigma Mission can take home prizes like a Sigma’s Invasion Pack Ticket and a 3.5 Year Anniversary Pack Ticket. Players that log in during the event will receive a newly drawn “Dark Civilization Sigma” card, Epic Card “Vassals of Darkness”, and Player Icon “Civilization Rebel Sigma”. There will also be a Mini Jewel Set and limited-time BGM in the Soul Shop, and the “Sigma Love Quiz” that rewards pack tickets for knowledge of Sigma.

Card Rotation
The “Breath of RESISTANCE” card set rotates out of Standard Mode with the introduction of “Sigma’s Invasion.” The following card sets are no longer allowed in Standard Mode:

Assets for “Sigma’s Invasion” can be found here.