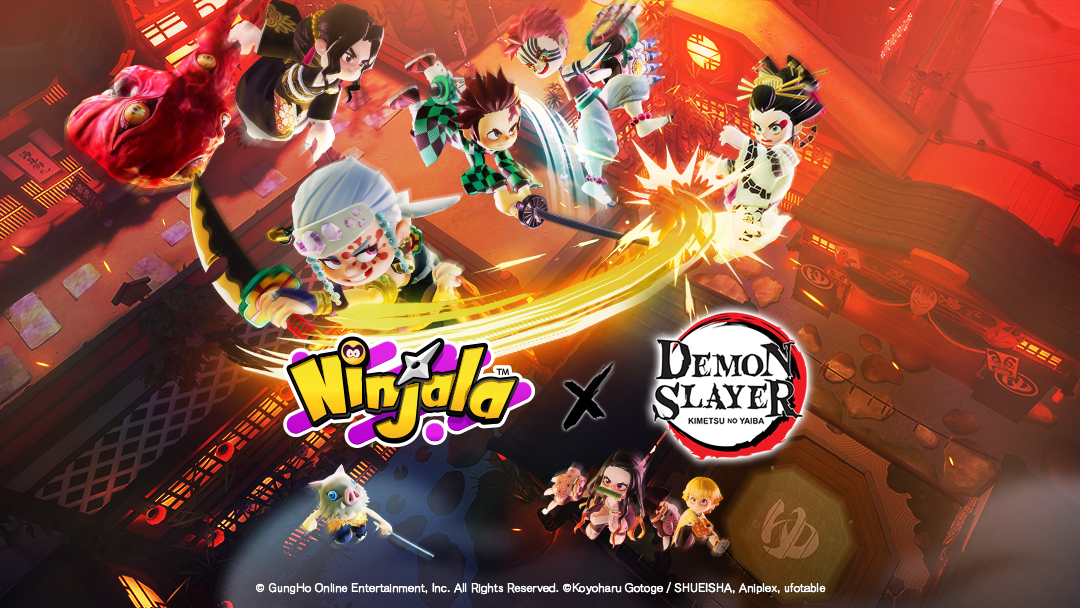 TOKYO, Japan – December 8, 2022 - The Demon Slayer Corps are back in Ninjala as GungHo Online Entertainment kicks off a collaboration with the hit anime Demon Slayer: Kimetsu no Yaiba. Now through January 11, 2023, players can show their support for the fight against demons with exclusive outfits, weapons, Utsusemi, and more based on the story of the Sound Hashira Tengen Uzui and Entertainment District arc.

Don Your Demon Slayer Corp Uniform
Slayers-in-training can pick up outfits and accessories in the Shinobi Shop, test their luck with the Gumball Machine, and participate in challenges for Demon Slayer Corp-themed goodies. If you want to go toe-to-toe with demons and sneak into the Entertainment District, you’ll need to dress the part. Disguise yourself with returning outfits for characters such as Tanjiro and Nezuko, as well as new killer outfits and accessories:

Forge Your Nichirin Swords for Battle
It takes more than just your fists to slay the Twelve Kizuki. In addition to the seven Ninja-Gums from the previous collaboration, four new event-exclusive Ninja-Gums based on the weapons from Demon Slayer: Kimetsu no Yaiba will be available, including:

Fight for Entertainment
During the collaboration, players can squad up and put their teamwork to the test with the Demon Slayer: Kimetsu no Yaiba Cup, a 4v4 team battle tournament that rewards players with a special collab IPPON Decoration and Avatar Items based on their rankings. All players who participate also receive a special collab Sticker. Demon Slayer: Kimetsu no Yaiba Cup will take place on January 7 from 6 p.m. to 12 p.m. PT. Players can also collect 2000 free Jala in the Super GOEMON Matsuri, as long as they log in between December 7 at 6 p.m. PT and January 12 at 5:59 a.m. PT.

What's Demon Slayer: Kimetsu no Yaiba?
Originally a manga by Koyoharu Gotoge serialized in Shueisha's Jump Comics, this series boasts 23 volumes that have sold a cumulative total of over 150 million printed copies. The anime is produced by ufotable.
First aired in Japan in Apr. 2019, the story begins with young Tanjiro Kamado joining the "Demon Slayer Corps" in search of a way to revert his sister, Nezuko—his only surviving family after their massacre by the hands of another demon—back into human form after she was turned into a demon herself. Then in Oct. 2020, "Demon Slayer -Kimetsu no Yaiba- The Movie: Mugen Train" movie adaptation was released, and the TV anime adaptation of the "Demon Slayer: Kimetsu no Yaiba Mugen Train Arc" and "Demon Slayer: Kimetsu no Yaiba Entertainment District Arc" were aired from 2021 to 2022.
Its heartrending tales of both people and demons alike, along with breathtaking displays of swordsmanship and occasional comedic scenes, garnered immense popularity worldwide.
©Koyoharu Gotoge / SHUEISHA, Aniplex, ufotable