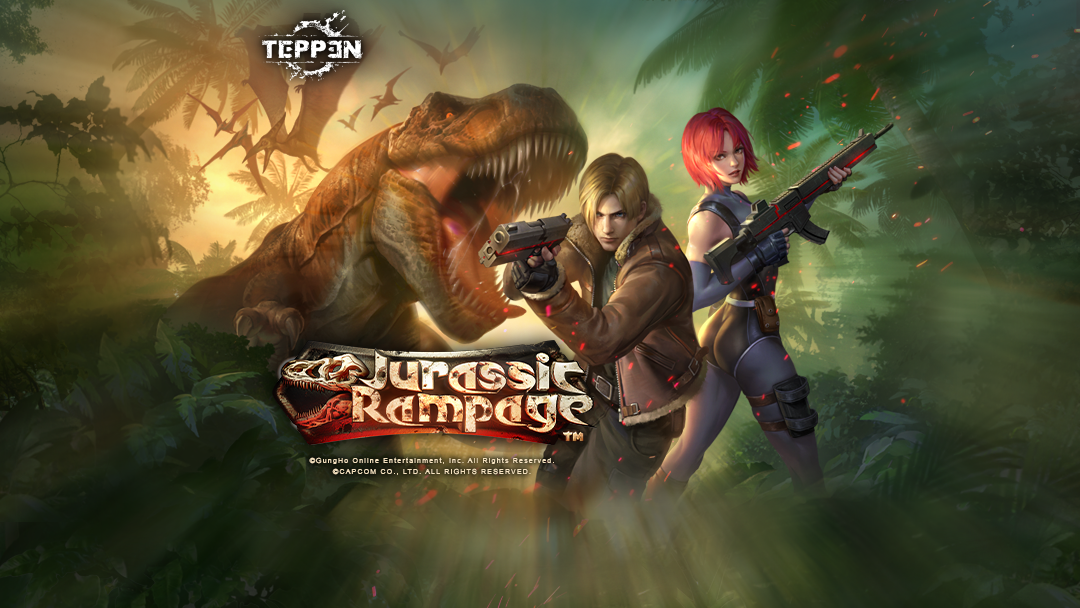 TOKYO, Japan – September 1, 2022 – Fight to survive against ancient threats as the “Jurassic Rampage” expansion launches in TEPPEN today. You can watch the full trailer here. Players are tasked with facing hordes of dinosaurs and deciphering the conspiracy behind their appearance with the heroes of the Dino Crisis and Resident Evil series, who join beloved characters from the Monster Hunter, Street Fighter, Mega Man series, and more. “Jurassic Rampage” is the first in a three-part series, Echoes of the Lost Civilization, coming to TEPPEN in the months ahead.

Giants Walk Again
On a remote island, an ancient, indefinite power source was recreated in a top-secret experiment, but when it went wrong, the resulting uncontrollable reaction created a rift in space-time to the prehistoric era of the dinosaurs. To investigate these Jurassic creatures and the power source that brought them to the present day, the government dispatches agents Leon Kennedy from the Resident Evil 4 series, and Regina from the Dino Crisis series. They are not alone: multiple underground organizations arrive to fight for control of the dinosaur-ridden island, putting these agents at the center of a complex struggle.

Rush the Battlefield
The new

New Cards
Use your full arsenal to help Regina survive, as you’ll be up against more than just dinosaurs. The Black card “Third Energy Genius Kirk,” the Purple card “Wolfpack,” the Red Card “Repelling Fire,” and the Green Card “Ancient Tyrant T. Rex” all enter the fray! Here’s a look at Ancient Tyrant T. Rex:

Limited-Time Adventure
A quest map for the previous expansion, “Island of Fear,” will be added to Adventure Mode, available from September 22 to December 1, 2022. Players can collect Puzzle Items and new Relics exclusive to the quest. The quest music, “Transcend” from Resident Evil Revelations 2, will be added to the Soul Shop for a limited time.

Campaigns
All players who sign into the game before October 31 will receive 10 new Pack Tickets for “Jurassic Rampage” and login bonuses to celebrate the prehistoric invasion. Two new BGMs from Dino Crisis will be added to the Soul Shop: “Set you at ease” and “A Rowdy in Ancient Ages.” Players can take on two Jurassic Missions to get new player icons: “The Treasure is Mine” and “Plesiosaurus.”

The 3rd Anniversary continues with:

Card Rotation
The “Island of Fear” card set rotates out of Standard Mode with the introduction of “Jurassic Rampage.” The following card sets are no longer allowed in Standard Mode:

Assets for “Jurassic Rampage” can be found here.

Download TEPPEN on the App Store, Google Play, and the Amazon Appstore.