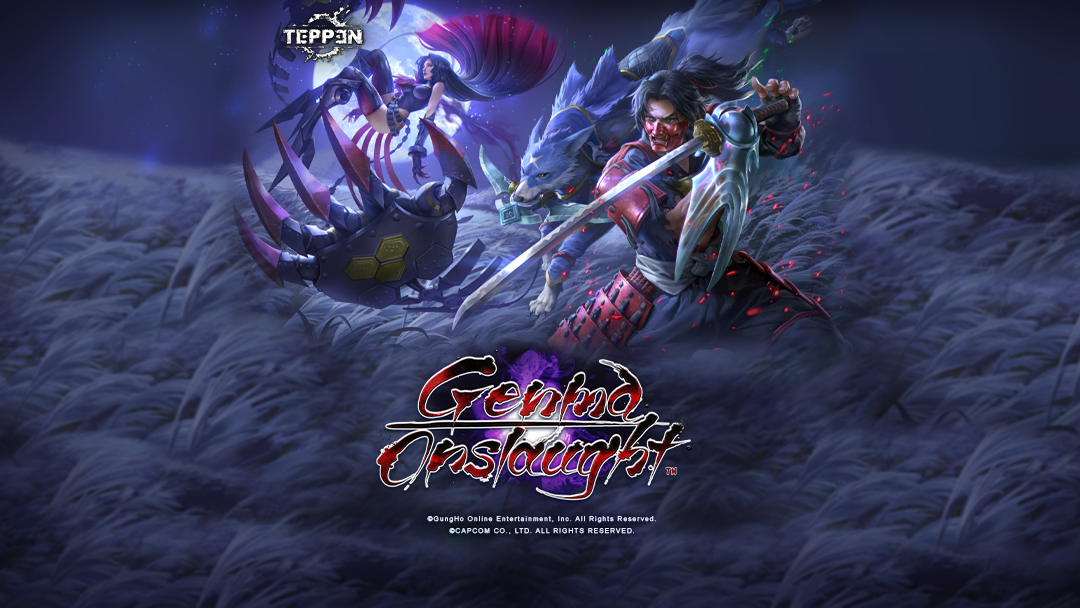 TOKYO, Japan – April 28, 2022 – A fight begins in Amatsu no Kuni as “Genma Onslaught” launches in TEPPEN today. Join the battle against a demon horde with characters from Onimusha and Monster Hunter Rise, who join beloved characters from Breath of Fire, Street Fighter, the Mega Man series, and more.

A Fragile Peace is Shattered
The battle against the Goddess Myria is over, but the peace settling over Amatsu no Kuni does not last long. A horde of Genma, wicked demons that hunt the innocent, attack on the night of the full moon. Without Goddess Myria to watch over Inabayama Castle, the Gates of Hell opens. The freed Genma King, Fortinbras, enslaves the ninja village of Kamura, and turns it into a factory to transform the ninjas into Genma soldiers.

An Avenging Ninja Rides On
During the siege of Kamura, one hero escapes! Palamute from Monster Hunter Rise teams up with Akechi Samanosuke to save the kidnapped Princess Yuki and free Amatsu no Kuni from the Genma.

A Paranormal Ability
Coming to TEPPEN as part of “Genma Onslaught,” <Immolate> allows players to commune with Spirits. Place a card with low health on <Immolate> cards to trigger instant effects.

New Cards
The evil Genma have turned people into weapons. Oichi has been corrupted and turned into Black card ‘Machine Armor Oichi.’ Demons may pour in from the deepest pits of hell, but heroes are rising up to meet them. The Red card ‘Onimusha Samanosuke’ and the Green card ‘Village Buddy Palamute’ lend their strengths to monsters like Purple card ‘Almudron.’ Here’s a look at Machine Armor Oichi:

Launch Campaign
Face a Rampage of monsters from Monster Hunter Rise and take back the Genma-controlled Kamura Village in a SP Mission, with first time clear rewards of Pack Tickets. After you finish beating back the army of hell, enjoy a campaign that brings new BGMs and items to the Soul Shop.

Card Rotation
The “Ace vs. The People” card set rotates out of Standard Mode with the introduction of “Genma Onslaught.” The following card sets are no longer allowed in Standard Mode:

Assets for “Genma Onslaught” can be found here.

Get ready to bust some IPPONs!

Win big while lounging around the hottest "vacation" spot of the season!