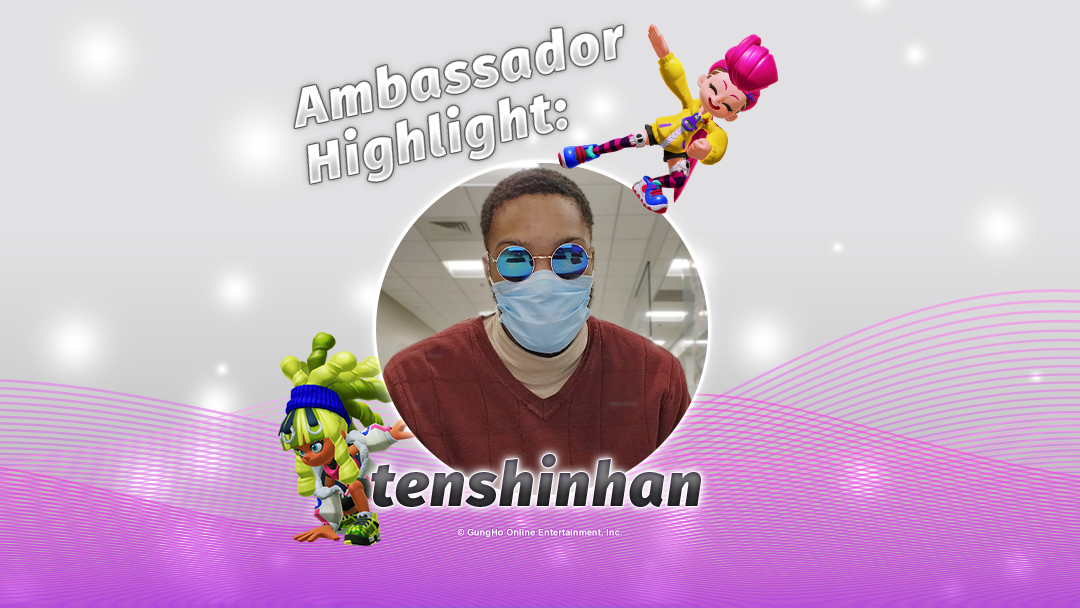 Meet tenshinhan, owner of the biggest North American competitive Ninjala league, the Elite Ninja League (ENL), and a GungHo America Ninjala Ambassador! As the owner of ENL, tenshinhan is always busy preparing and running every season and event. Read what goes on behind the scenes and what his goals for ENL are!

How did you start your career as a content creator/streamer and what kind of streams do you do?
My career as a streamer/content creator really started after I took over the operations of the Elite Ninja League (ENL). The founders of the league ended up drifting away and I was the one that stepped in and took over operations. When spectator mode was added to Ninjala in Season 3, I knew I wanted to stream/record as many ENL matches as I could so the community could watch their fellow clan members and favorite players battle it out and cheer them on in the process. The majority of my streams are competitive Ninjala matches and tournaments with occasional miscellaneous Ninjala streams ranging from VOD reviews and analysis of team scrims/ENL matches to general gameplay streams.

What is your favorite GungHo game?
My favorite GungHo game is Ninjala because of the freedom it gives me to play the game the way I want to play it. I learned about the game through the March 2020 Nintendo Direct. I was in a game drought and found the game interesting so I followed PlayNinjala on Twitter and marked my calendar for the release date.

What kind of tips do you have for someone who just started playing Ninjala?
My advice is to find a team/clan or experienced player to help you learn the game and ask a lot of questions. Through Twitter or Discord, you can find community members willing to help you or direct you to the people you need to speak to learn more about the game.

How did you become a GungHo America Ambassador and what do you like the most about it?
I became a GungHo America Ambassador after around 1.5 years and five successful completed seasons of the ENL along with assisting with other tournament series for Ninjala since the game’s release. I had already cemented myself as a pseudo-ambassador and head of competitive Ninjala for North America, Europe, and Latin America. I just was waiting on the opportunity to represent GungHo America as a whole and, eventually, I got it. The thing I like the most about being an Ambassador is the ease of access I have to speak with the rest of the GungHo America staff. They are a really cool group of people who really enjoy what they do.

How are ENL events planned and organized?
For our three major divisions, Primary League (upper division team battle), Secondary League (team battle), and the Elite Battle Royale League, the season schedule is made ahead of the season start and teams are informed of their matches the week that they play them. We prefer to leave a week before the playoffs for each division and have playoffs towards the last two weeks of the season. This means we plan our events backward starting from the date we want playoffs to happen and scheduling things in reverse from there.

For side events, like a Striker tournament, if we have a good idea for an event, we work quickly to turn the idea into a tangible format (writing out rulesets, determining player/team cap, etc.) so that we can run at the soonest availability.

What are the difficulties and challenges of running ENL?
The difficulties mainly lie in everything extra outside of facilitating and streaming the matches. Updating the website, uploading the VODs to the YouTube channel, recording the statistics, managing the Twitter account, making new graphics, scenes, and transitions, updating the master excel sheet, preparing the players for their matches week by week, etc.

What are your goals for ENL?
I have two long-term goals for the ENL. Number one is to be able to run an ENL division for Japan. The major constraints regarding that are the language barrier and time zones but the more time spent optimizing the operations of the organization, the more I’ll be able to focus on those constraints because the rest of the league would be running efficiently.

The other goal is to be able to host a Worlds event in a live venue. I want to be able to invite the best two teams from each region to duel it out over the course of a weekend. It’ll require a lot of work (an unfathomable amount of work for a single individual) and a lot of moving parts, but it is a long-term goal for a reason.

My motivation for streaming is being able to show high-level competitive Ninjala to as many people as possible. Nothing more, nothing less.

Any advice for someone who wants to become a content creator?
My advice is to just turn on the stream when you decide to play a video game. Get into the habit of playing the game like someone is watching. Then find that one thing to differentiate your stream/content from others.

Want to learn more about tenshinhan? Follow his social media and channels to never miss his streams!