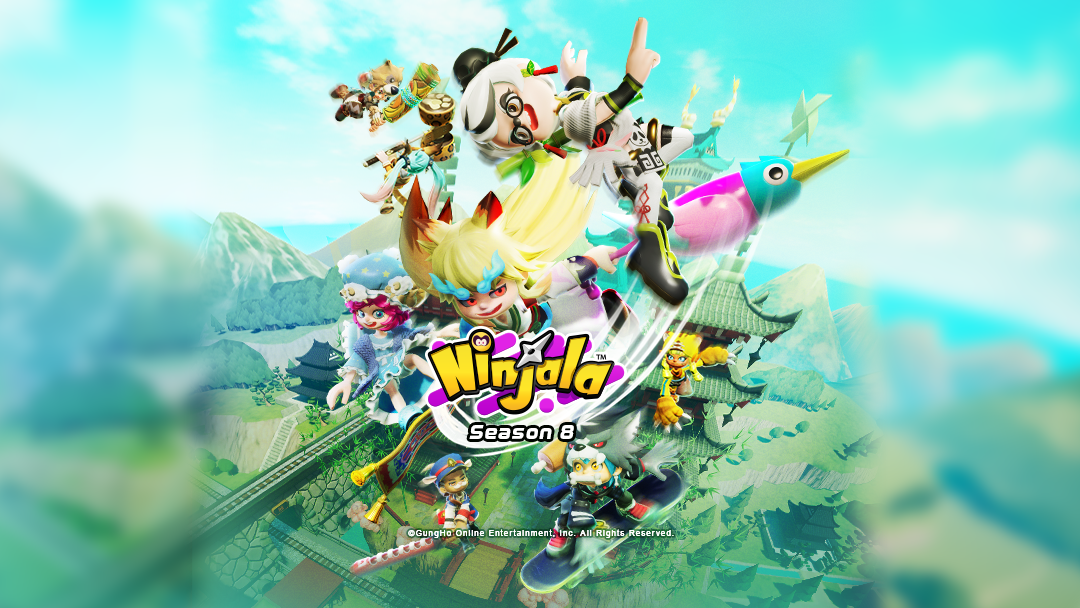 Let Your IPPONs Roar in Season 8
Today through March 9, your favorite ninjas take on beastly forms with the eighth season’s animal theme. Get your paws on this animal apparel as well as new Gum Weapons and Shinobi Cards from the Shinobi Shop.

This season introduces a 4-on-4 Featured Battle, Turf Match, in which teams compete to control as much of the map as possible. Monthly online tournaments known as WNA Tours begin with the Hanzo Cup on December 25. Fight to earn more points than your opponents in this ranked ladder system to take the top spot, a commemorative Gold Badge, and 10,000 Jala.

Step Back in Time with the Rurouni Kenshin Anime
Wander into the Meiji era when the anime Rurouni Kenshin joins Ninjala December 15. Dawn the attire of a legendary swordsman, like Kenshin Himura, Hajime Saito, or Aoshi Shinomori, and draw your sword with Ninja-Gums styled after their weapons. Players can also take pride in emotes, IPPON Decorations, Gum Utsusemi, and more based on the best-selling series.

The more fights you win, the better rewards you earn through Ninjala’s Battle Frequency Bonus, coming with the collaboration. The Rurouni Kenshin Cup also grants players prizes depending on how well they can fend off their foes. This collab tournament begins January 10 and lasts six hours.

Watch the World of Ninjala from Any Screen
After the YouTube cartoon anime series and a serialized manga in CoroCoro Magazine, Ninjala is making its broadcast and streaming debut with a new anime series. Starting January 2022, fans can watch Berecca, Burton, and the WNA Academy students take on action-packed Ninja-Gum battles, featuring an opening theme song from Japanese pop singer Kyary Pamyu Pamyu, “Maybe Baby,” and an ending theme song from Wolpis Carter, “Ninja like ninja.”

To commemorate the anime series, fans can tune in to spot special codes, earning 50 Gumball Machine Coins per code. Alternate outfits for Berecca, Ron, and Burton will be available in a Commemoration Coin Gumball Machine. Players can also pick up Ninjala’s Story Pack: Chapter 1 and Chapter 2 for 90% off.

Ring in the New Year
To celebrate another year of bubble-blowing, wall-running action, Ninjala’s New Year 2022 Campaign grants players up to 100 Gumball Machine Coins for logging in. Players can also purchase a one-time Jala pack that includes bonus Gumball Machine Coins. Use these Coins and Jala to obtain special limited time outfits in celebratory Gumball Machines.