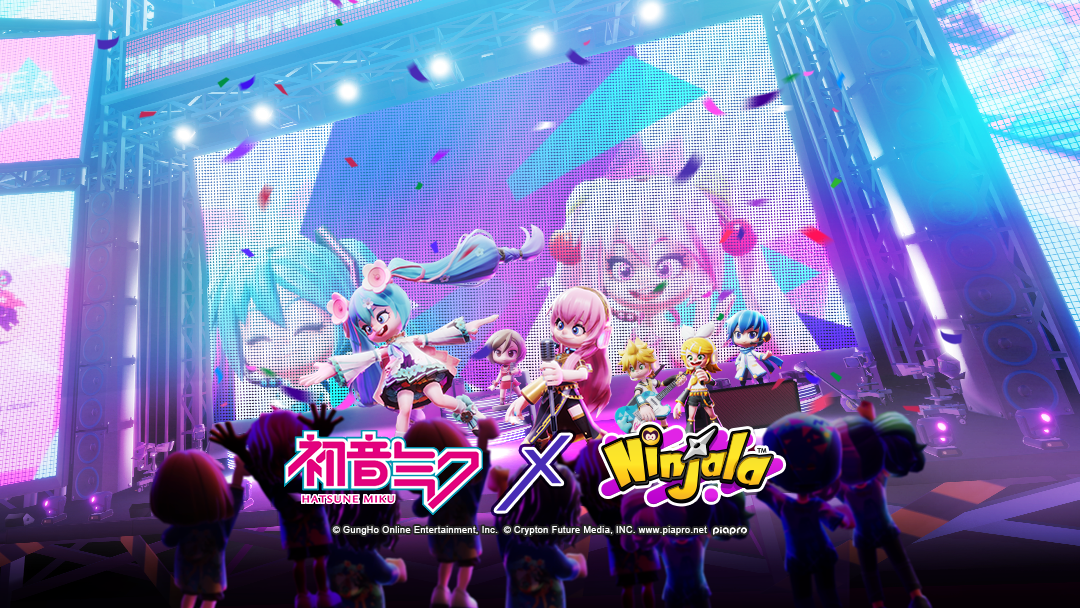 TOKYO, Japan – October 7, 2021 - Hatsune Miku, the world-famous virtual singer, has arrived in Ninjala as part of her Magical Mirai 2021 tour! All players are granted admission to this musical collaboration until November 7. Ninjala is available as a free download on the Nintendo eShop for the Nintendo Switch.

Concert-goers can dress up as their favorite virtual singers with the new Miku Magical Mirai 2021 Outfit from the Gumball Machine and five new costumes for 2,000 Jala each, including:

Fans will want to visit the merch table as soon as possible, because the shop is fully stocked with Hatsune Miku-themed goodies. Get ready to bring down the house with five exciting BGMs for 200 Jala each, featuring Magical Mirai 2021’s theme, “Hatsune Creation Myth.” Fans can also jam to these other popular hits: “Senbonzakura,” “ROKI,” “Just Be Friends,” and “Shake it!”

Show your Miku spirit by picking up some limited items, including seven emotes—inspired by “PoPiPo,” “Alien Alien,” “Mikumiku Ni Shiteageru,” and “Double Lariat”—and three IPPON Decorations for 500 Jala each, seven stickers for 400 Jala each, and a Gum Bottle and the following Gum Utsusemi for 800 Jala a pop:

Players can crank the Gumball Machine to grab two Ninja-Gum: IPPON Katana and Chewing V. The IPPON Katana and a unique sticker are also available as part of a new battle count promotion, which players can claim by playing 39 battles during this collab.

Participants in the Hatsune Miku Cup tournament can earn a special sticker, four IPPON Decorations, and the Leekspin emote as prizes. Out-dance your opponents to win these rewards!

What is Hatsune Miku?
Hatsune Miku is music software developed by Crypton Future Media, INC., and it enables anyone to make the computer sing by entering lyrics and melodies. As a massive number of users created music using the software and posted their works on the Internet, Hatsune Miku quickly evolved into a cultural phenomenon. Moreover, Hatsune Miku has gained much attention as a character, involved in many fields such as merchandising and live performance as a virtual singer. Now her popularity has spread across the globe.