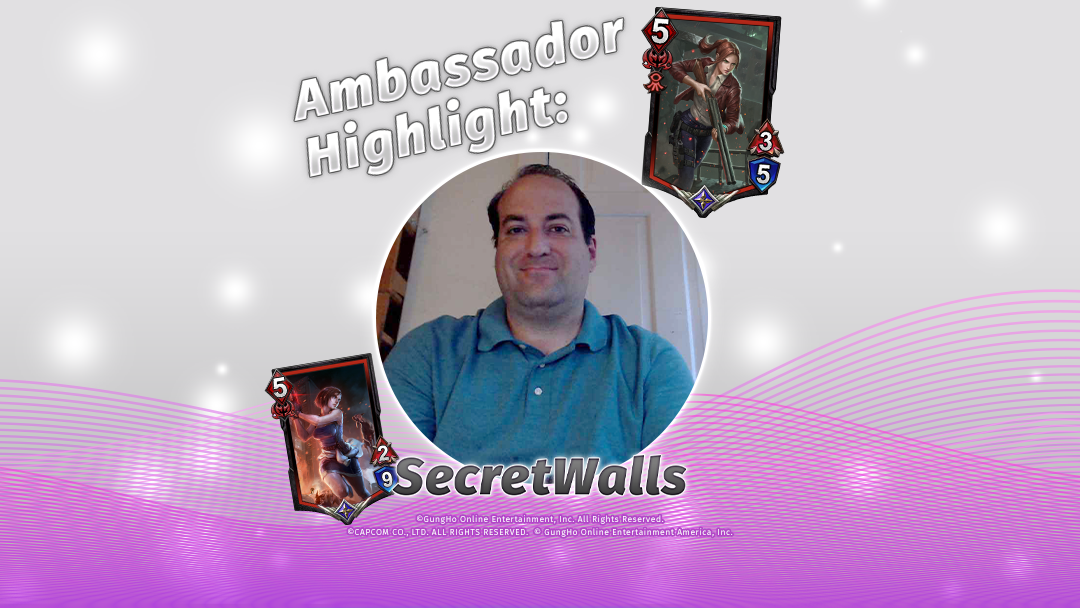 SecretWalls is a top Jill (and Nina) TEPPEN player and streamer, most known for being the North American host for the WORLD CHAMPION SERIES 2021 (WCS2021) finals day 1 coverages. Read how SecretWalls started playing and streaming TEPPEN, and join him in the last few remaining WCS day 1 coverage streams!

How did you start your career as a streamer and what kind of content do you create?
I had watched a lot of TEPPEN streams from Yawley, Iowatheboat, TheThirstyGames, and Christopher D, to name a few. I wanted to stream the game that I loved. TEPPEN is what got me into streaming as I don’t know if I would have streamed if not for TEPPEN.

What is your favorite GungHo game and why?
My favorite GungHo game is TEPPEN. I first read about the game in an article on EventHubs. I was initially interested in it because it was a game that feature tons of Capcom characters and looked completely different than anything I had ever played before. I last played Magic: The Gathering several years ago, but I haven’t played another card game since. I gave TEPPEN a try and have enjoyed it ever since.

Do you have any tips for someone who just started playing TEPPEN?
The TEPPEN Discord community is a great place to start as you can see players talk about current strategies. TheThirstyGames’ Discord is also another place where players can go, and Vintendo’s Discord as well. All of the players in those Discords are really helpful and are great starting points trying to learn the game.

How did you become a GungHo America Ambassador and what do you like the most about it?
I saw quite a few people talk about it on Twitter and I saw that there was an application to join. My favorite parts about being an Ambassador are the opportunity to reveal cards in upcoming new expansions and being able to stream day 1 coverage for the WCS2021 every month.

How has hosting the Day 1 coverage of the WCS2021 finals every month been like?
I was super excited that we were going to be able to broadcast the day 1 matches. When the announcement was made, I absolutely wanted to make sure that I gave the North American audience a chance to see the matches. Even though the event occurs at hours that are not great for the North American audience, it has been incredible seeing the best players in the game play. Some of the most incredible moments in WCS2021 come on day 1 and it is well worth watching some of these matches.

Do you have any goals as a streamer and GungHo America Ambassador?
I was an FGC player for the longest time. Ultimately, I would like to get a better PC to allow me to stream more games. I am hoping to stream Street Fighter V and Ace Attorney, which are two of my favorite Capcom series.

I want to continue promoting the game that I love for a long time and I am hoping to make it to California one day to see the GungHo America office. That, and I would love for the TEPPEN community to have one big meetup one day.

What are your motivations for streaming?
After playing TEPPEN for a while, I felt confident enough to give streaming a try. I play Jill primarily when she is weak and I play her when she is extremely strong. I wanted to show how I played the character and the types of decks I was using with her.

Any advice for someone who wants to become a streamer/content creator?
Do not worry about getting a fancy set up or anything of that nature. If you want to stream and you love the game, go for it. Be yourself, have fun, and engage with members of the community who are always willing to help support other TEPPEN streams and content.