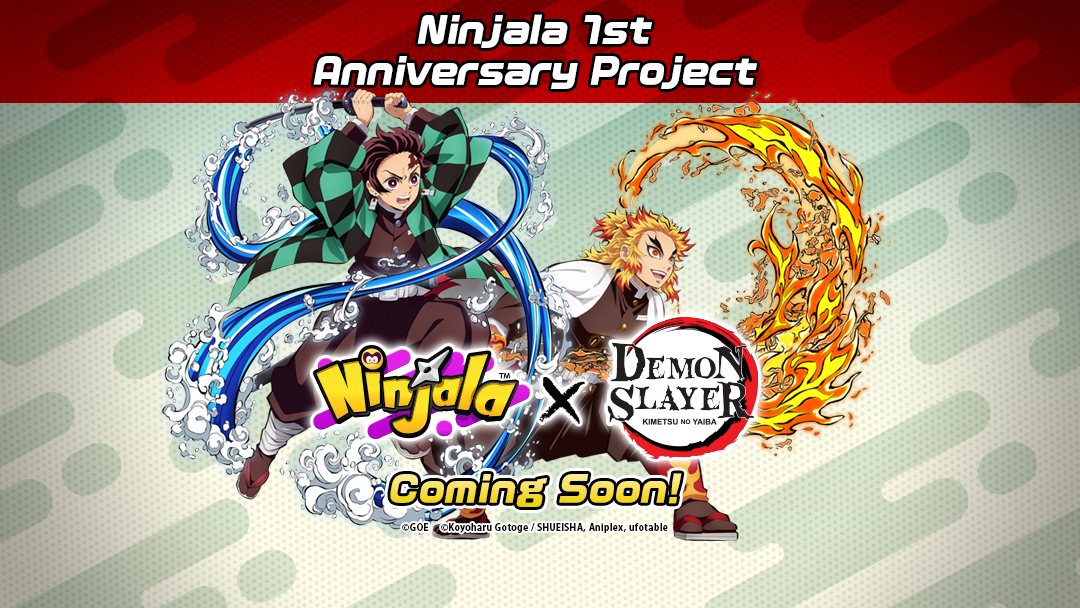 TOKYO, Japan - June 25, 2021 - Things are heating up for Ninjala’s first anniversary! GungHo Online Entertainment today announced a new collaboration with the hit anime Demon Slayer: Kimetsu no Yaiba alongside its other 1st Anniversary festivities. Now through September 8, players will get the party started and get a little sand between their toes at the same time with Season 6.

June 17–September 8: Season 6
There’s plenty of sand for sandcastles in Season 6, which introduces:

July 17: 1st Anniversary Cup
Rise above your opponents like the summer sun in a special ranked tournament for Ninjala’s anniversary! The 1st Anniversary Cup is open to all regions, and all participants will receive a sticker as a reward. Players must collect points throughout the tournament, and the top four players will earn a unique IPPON Decoration and Emote. Players can also obtain additional IPPON Decorations, Emotes, Gumball Machine Coins, and Ninja Medals.

2021 Roadmap: Season 7
Today’s 1st Anniversary Celebration Stream also revealed that Ninjala’s Season 7 will debut a new Featured Battle called Last Ninja Standing. Gather 8 of your friends and fight until the last one standing wins in this 8-player battle royale! All Gum Weapons and Shinobi Cards are allowed, and players will duke it out on the WNA Academy stage. There are no second chances here—once you go down, you cannot respawn. Do you have what it takes to come out on top?

Additionally, Season 7 will introduce a Visual Lobby in beta. The lobby can host more than eight players, who can communicate by showing off their outfits, Emotes, Stickers, and more. No fighting is allowed, but nothing is stopping you from running up the walls or doing Gum Dashes!

Review codes for Story Pack: Chapter 1 and 2 are available upon request. Please email gungho@triplepointpr.com for codes.

What's Demon Slayer: Kimetsu no Yaiba?
A TV anime series based on Koyoharu Gotoge's best-selling manga, serialized in SHUEISHA's JUMP COMICS with its 23 volumes selling a cumulative total of over 150 million printed copies in Japan (as of Apr. 2021).

First aired in Japan in Apr. 2019, the story begins with young Tanjiro Kamado joining the "Demon Slayer Corps" in search of a way to revert his demon-turned sister Nezuko—his only surviving family after their massacre by the hands of another demon—back into human form. Its heart wrenching tales of both people and demons alike, along with breathtaking displays of swordsmanship and occasional comedic scenes, garnered immense popularity worldwide.

Then on Oct. 16, 2020, the "Mugen Train Arc" movie adaptation was released in Japan as a direct sequel to the TV anime. Furthermore, a new season of the TV anime is currently scheduled to air in 2021.