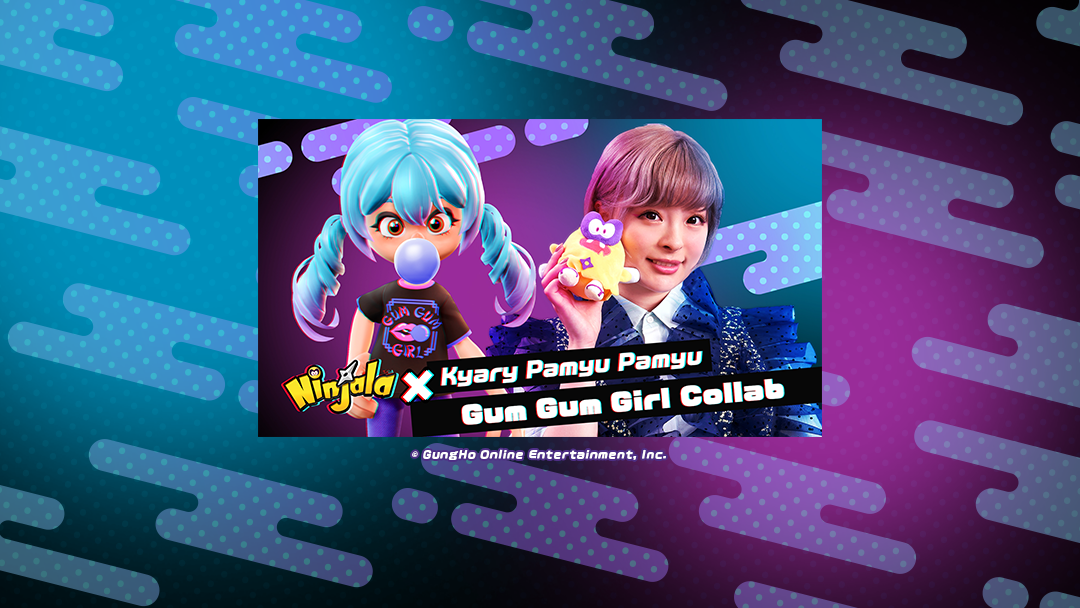 Upcoming Collaborations
After the much-loved Kyary Pamyu Pamyu “Ninja Re Bang Bang Steve Aoki Remix” collab, Ninjala’s popstar collab returns with new in-game music and a commemorative T-shirt! Items from the first collaboration will be available from the in-game shop.

Uncle Death rides into Ninjala as a part of the game’s first LET IT DIE collaboration. Your favorite skeletal skateboarder brings a whole lot of goodies like headgear, Ninja-Gum for the Matsuri Board, and an IPPON decoration. All players who play during the collaboration will receive a LET IT DIE sticker as a log-in bonus.

Featured Battle
S-Blast Battle Test Play! is a limited-time Featured Battle that replaces S-Bursts with a new mechanic, “S-Blasts.” S-Blasts are similar to S-Bursts, but instead of parrying when attacked, they will push attackers away to interrupt the pace of the fight. The basic rules are the same as the Battle Royale - grab the most points, you win! Battle rewards for this Featured Battle include the new “Xenon Headphones” headgear, as well as Assist Codes and Ninja-Gum. This new Featured Battle will also be a Test Play, so players can share any feedback they have via social media to influence future combat systems.

1-Year Anniversary Roadmap
After Season 4, Ninjala will celebrate its 1st anniversary in June 2021. GOE revealed the game’s roadmap leading up to the celebration, including what players can expect in Seasons 5 and 6.

Additional features that fans have asked for, like “Clans,” “Multiplayer Lobbies with Avatars,” and much more will be added moving forward. Stay tuned for more details!

Review codes for Story Mode Chapter 1 and 2 are available upon request. Please email gungho@triplepointpr.com for codes.