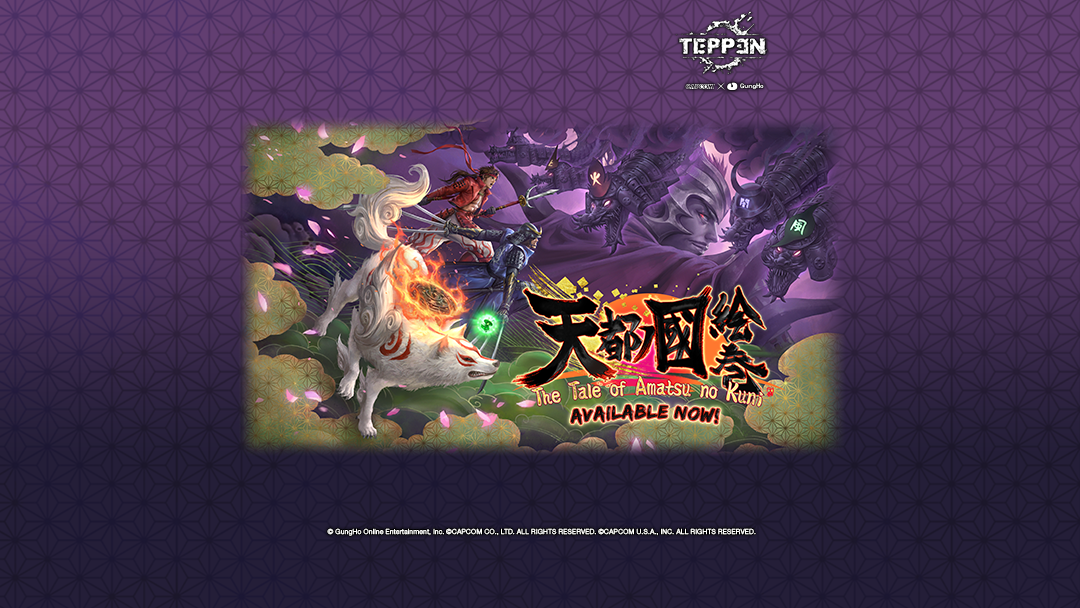 TEPPEN Tells "The Tale of Amatsu no Kuni"

The Okami and Sengoku Basara series make their debut in TEPPEN with new cards featuring characters from both games, including Wood Sprite Sakuya, Sun Goddess Amaterasu, Divine Spear Yukimura, and Oshu Lord Date Masamune. Among these cards are two new Tribes: Kami and Spirit, as well as the new ability Crush. Crush bestows you with the power of the Goddess, allowing you to deal high damage when attacking without taking damage from counters.

Also new to TEPPEN is the “white wolf,” the Red Hero Amaterasu, who has been gifted three powerful Hero Arts straight from the Celestial Plains:

This “tale” begins when Gods and humans existed peacefully in Amatsu no Kuni - but no peace lasts forever. In one burst of fury and darkness, the evil eight-headed serpent god Orochi returns, along with the evil king Nobunaga Oda. Faced with the quickly-spreading darkness, a lone wood sprite looks to the heavens and prays—prays for salvation from this impending evil—and the heavens answer. The legendary sun Goddess Amaterasu appears, summoning heroes from across the realm to aid her in the battle to purge the darkness. In one final stroke of divinity, a celestial warrior strikes Orochi down with his empyrean blade, shattering the night which had fallen upon the realm. Although the battle was won, the war is still to come—where will this mystical sword guide them next? Follow Ameraterasu and her allies through “The Tale of Amatsu no Kuni.”

Check out the assets for “The Tale of Amatsu no Kuni” here.