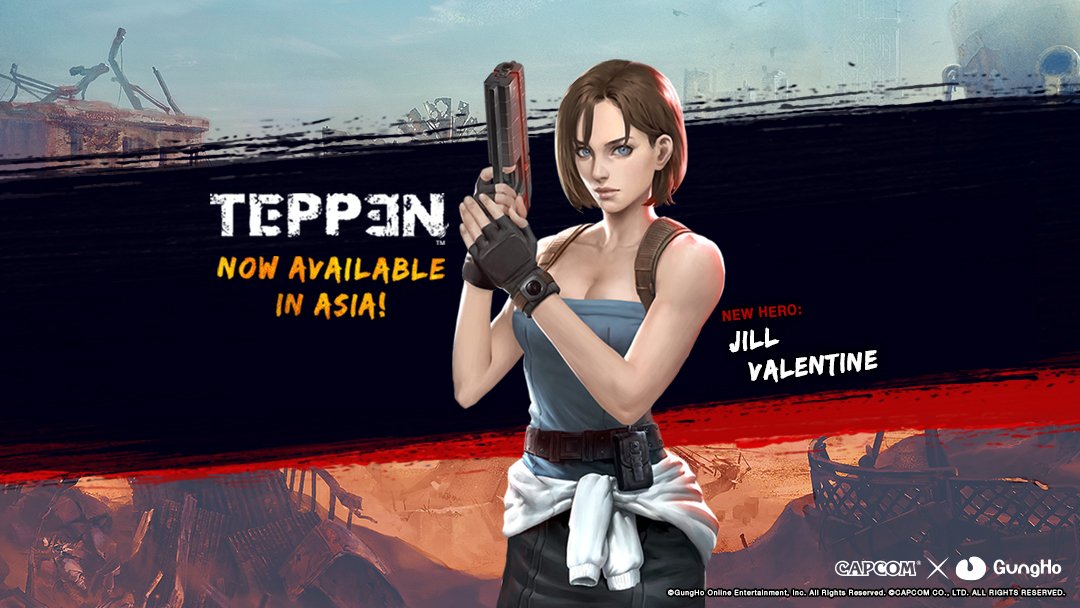 EL SEGUNDO, Calif. - August 8, 2019 - GungHo Online Entertainment (GOE) has announced the release of TEPPEN, the ultimate card battle game for mobile from the joint development team of GOE and CAPCOM, in Asia. GOE has also announced the addition of Jill Valentine from Resident Evil to the list of legendary CAPCOM heroes.

Along with Jill Valentine joining the Hero roster, the “Day of Nightmares” card pack expansion was revealed. Due in September, “Day of Nightmares” will introduce more elements from Raccoon City to the Land of Illusion. Details on gameplay balances and updates were also shared, and can be viewed on TEPPEN’s official Twitch channel at www.twitch.tv/playteppen.

Details on TEPPEN’s competitive plans were shared with the reveal of the TEPPEN World Championship, the first worldwide tournament in which representatives from around the globe will face off in the Ultimate Card Battle for a large cash prize. The TEPPEN World Championship will take place in Tokyo coming this December and online qualifying matches will begin in October 2019. Also announced were the PAX West Invitational Tournament, Tokyo Game Show Cup, and other events in various regions.

As if that wasn’t enough, more new Heroes and card packs were teased for arrival in TEPPEN for later this year. More details will be shared at a future date.

Launched on July 4, 2019, TEPPEN is an innovative and exciting new way to play card games. With its real-time card battle system, it keeps players on their toes like no other mobile game of its genre. Add in stunningly hand-drawn art for iconic CAPCOM characters like Ryu, Rathalos, Morrigan Aensland, and others, TEPPEN is one of the biggest mobile releases this year. To date, TEPPEN has surpassed one million downloads and is available for download on the App Store and Google Play.

Find out more about TEPPEN on its official website,Twitter, or Facebook. For information on GungHo Online Entertainment America, visit www.gunghoonline.com, or visit GungHo on Twitter or Facebook. Find assets here.

ABOUT TEPPEN
There’s only one way to Rise to the Top – playing TEPPEN! TEPPEN is the Ultimate Card Battle game where units you command operate in real time, featuring dynamic action with over-the-top attacks blowing up your screen. With astonishing graphics and a cutting-edge battle system, TEPPEN is the card game to end all other card games! Command popular Heroes (characters) from Monster Hunter, Devil May Cry, Street Fighter, Resident Evil, and other series in All-Star action from CAPCOM’s finest!

ABOUT CAPCOM
CAPCOM is a leading worldwide developer, publisher and distributor of interactive entertainment for game consoles, PCs, handheld and wireless devices. Founded in 1983, the company has created hundreds of games including ground-breaking franchises Resident Evil™, Street Fighter™, Monster Hunter™, Ace Attorney™, Mega Man™ and Devil May Cry™. CAPCOM maintains operations in the U.S., U.K., France, Germany, Tokyo, Taiwan, Hong Kong and Korea, with corporate headquarters located in Osaka, Japan. More information about CAPCOM and its products can be found at www.capcom.com or www.capcom-unity.com.

CAPCOM, the CAPCOM logo, Ace Attorney, Devil May Cry, Mega Man, Monster Hunter and Resident Evil are trademarks of CAPCOM CO., LTD., in the U.S. or other countries. Street Fighter is a trademark of CAPCOM U.S.A., INC.