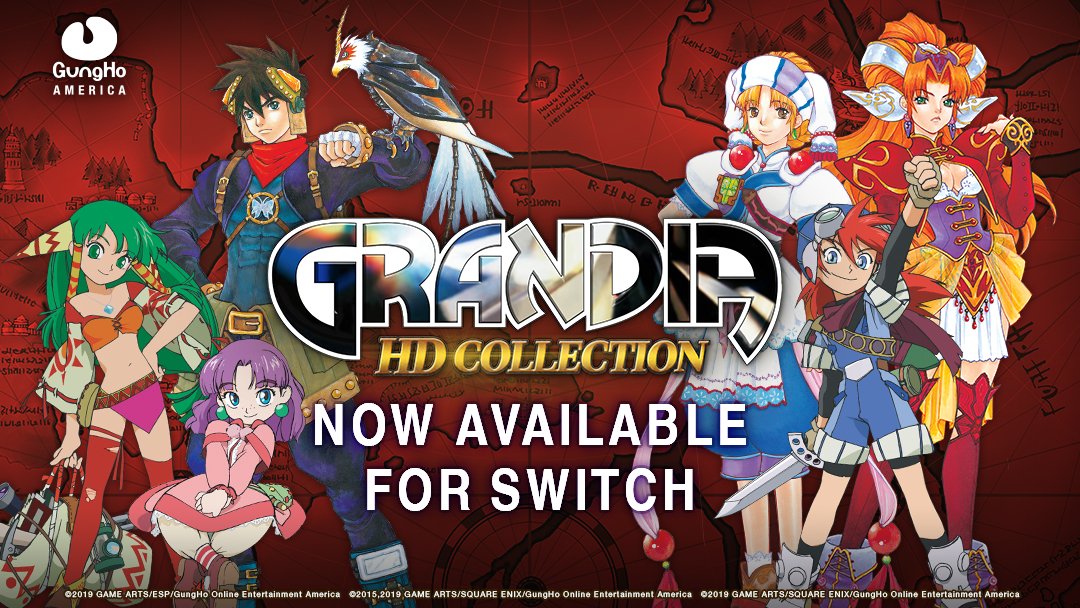 EL SEGUNDO, Calif. – August 16, 2019 - Two quintessential RPGs have finally gone portable on one of gaming's most popular console/handheld hybrid platforms. The highly anticipated GRANDIA HD Collection for the Nintendo SwitchTM is now available for $39.99. Additionally, GRANDIA HD Remaster and GRANDIA II HD Remaster for PC will be released in September 2019.

“As one of gaming’s long-standing and classic RPGs, we’re extremely pleased that fans of the GRANDIA series are now able to access their favorite characters and magical combat wherever they go on the Nintendo SwitchTM,” says Jun Iwasaki, President & CEO, GungHo Online Entertainment America, Inc. “GRANDIA and GRANDIA II are incredible tales, and these HD remasters are the definitive way to experience them for new and veteran players alike.”

Review copies for GRANDIA HD Collection for the Nintendo SwitchTM are available upon request. Please email gungho@bhimpact.com for review copies.

Find more about GRANDIA HD Collection on its official website. For information on GungHo Online Entertainment America, visit www.gunghoonline.com, or visit GungHo on Twitter or Facebook. Assets can be found here.

ABOUT GRANDIA
Originally designed and created by developer Game Arts, creators of such classics as the Lunar and GRANDIA series, GRANDIA was met with wide critical acclaim when released for the SEGA Saturn in 1997 and PlayStation® in 1999. GRANDIA received numerous awards including GameSpot Editor’s Choice, IGN Editor’s Choice Award and an Award for Excellence from CESA AWARDS ’97, currently known as “Japan Game Awards”. Telling the story of protagonist Justin and his companions in a race against the evil Garlyle Forces to uncover the long-lost secrets of an ancient civilization. GRANDIA became an instant classic and is now considered one of the most influential RPGs of all time. GRANDIA HD Collection is available now on Nintendo SwitchTM and GRANDIA HD Remaster for Steam will follow at a later date.

He's ready to spread some Atomik-Energy to the Ninjala Community